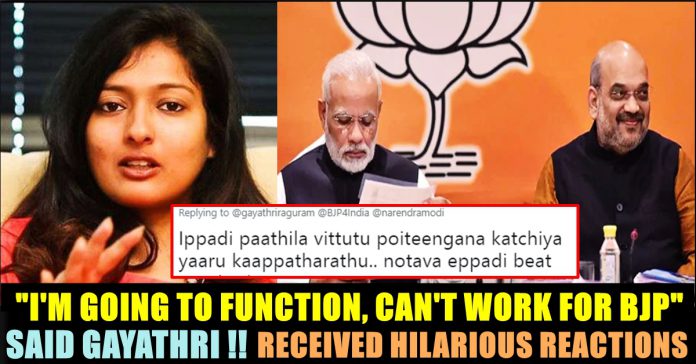 Nominations for the April 18 Lok Sabha polls in Tamil Nadu came to a close Tuesday, with over 1,000 persons, including two members from the third gender filing their papers in the four cornered contest. Meanwhile Tamilnadu BJP party member Gayathri Raguramm has said that she could not work for her party as she is leaving to USA due to family function. Posting this in her official twitter account Gayathri also said that she will pray for BJP to win in this election.

I’m leaving tonight to USA for my family function I will be unable to work for @BJP4India this election but my support is there for @narendramodi I pray for Modi ji to win and our country in right hands. I hope people know the reality and not go by media and SM 2 vote. #NaMo2019

Check out the reactions for her tweet by her own followers :

Thank you very much mam….We are blessed to not hearing your political speech anymore for this election…country will in right hands but not with Namo for sure

How about casting your vote? Hope you will be returning at least on 18th Apr to do your democratic duty.

BJP will never win anyway. So, better you escape.

Following this she also posted another tweet saying that she will come to India to cast her vote :

I will return for casting my vote. My vote for @narendramodi. #NamoAgain @AmitShah @PMuralidharRao. @PonnaarrBJP @CPRBJP @HRajaBJP @NainarBJP my full support for u in social media. I’m sure we will win god bless. My campaigning will be SM medium.

Gayathri Raguramm is an Indian choreographer and actress who has worked in the South Indian film industry. The daughter of prominent choreographer Raghuram, Gayathri began her career as an actress in the 2002 film Charlie Chaplin and after a career break, she began working as a choreographer in films during 2008. She is laos known for her participation in BIGG BOSS Tamil.