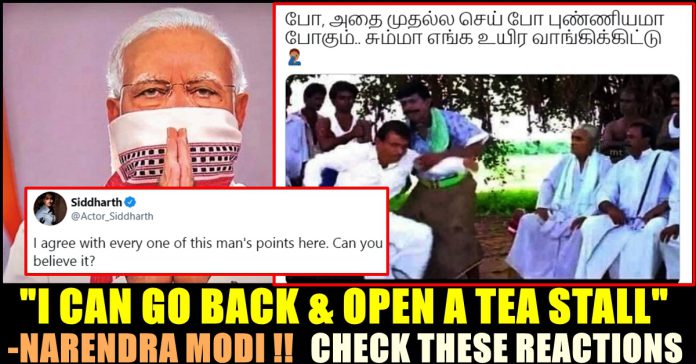 “I Can Go Back & Open A Tea Stall” – Narendra Modi !! Internet Reacts Now

With COVID 19 cases increasing in vast number amidst people seeking social media’s help to get hospital beds, oxygen, blood requirements, many people started criticizing the Modi-led central government in social media. Now, Pan Indian actor Siddharth quoted an old tweet of the Prime minister and said that he completely agrees with him. In the tweet which was posted on April 2019, Modi said that he could go back and open a tea stall.

The deadly virus named COVID 19 continues to affect the people of India as they are cope up with news of increasing deaths and rising numbers of infections in large parts of the nation. Major cities in India reel from crumbling hospital infrastructure as lack of medical oxygen and hospital beds drive families of those infected to despair.

On Friday, India recorded as many as the world’s highest single-day spike with 3,32,730 fresh Covid-19 new cases in 24-hours, pushing the overall caseload to 1,62,63,695, according to the data provided by the Ministry of Health and Family Welfare on Friday morning. This is the first time any country has recorded over 300,000 cases in just 24 hours.

States in the country are imposing lockdown again to restrict the spread of the virus. Now, a 2014 tweet of Prime minister Narendra Modi criticizing the ruling government is doing rounds in social media platforms. “India needs a strong Government. Modi does not matter. I can go back & open a tea stall. But, the nation can’t suffer anymore.” he wrote on 29th of April, 2014.

India needs a strong Government. Modi does not matter. I can go back & open a tea stall. But, the nation can't suffer anymore.

Reactions from the users of Twitter are storming for the tweet now. “I agree with every one of this man’s points here. Can you believe it?” actor Siddharth replied to this tweet.

I agree with every one of this man's points here. Can you believe it? https://t.co/m1SWxpgdmo

Check out some of the other reactions for the tweet below :

Please go back. We need someone educated 🙏

He would've never imagined this tweet will become viral after 7 years. And honestly everyone here seems to give him a better career advice.

Sir, I voted you in 2014 for a new system. But now it seems that you are too much obssesive of your Marketing gimmicks…need to deliver now as a PM of India not as Crowdpuller of BJP.
I have already given up on you Sir!!

Video Of Main Rapists Getting Brutally Beaten Up By Public Goes Viral !!