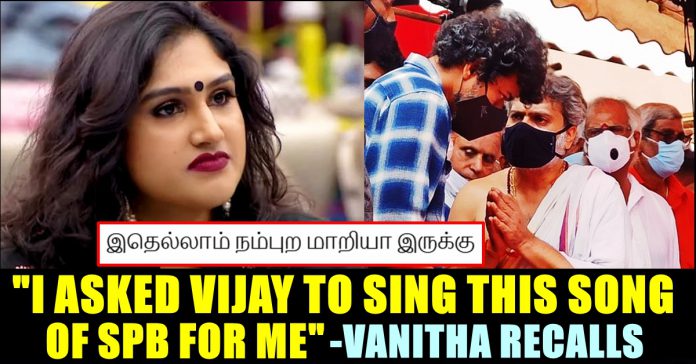 Entire Kollywood industry came up with emotional posts paying respect to the legendary singer SP Balasubrahmanyam who died after combatting with the COVID 19 virus for 50+ days. He who sung 40,000 + songs in his entire career, left his fans, friends, relatives and colleagues in a dejected state. Despite of the COVID 19 fear, public people attended the funeral of the legend to pay their final respect.

SPB was responding well to the treatment till Wednesday. His health was improving and the amount of air that moved in or out of the lungs with each respiratory cycle increased giving his doctors and family hope. However, on Thursday, there was a cerebral haemorrhage, leak in the brain that made the treatment difficult. “To stop the leak, we need to stop the medication that thins his blood. But his blood has to be thin to flow freely in and out of ECMO”, said Dr. Rao. With a cardio respiratory arrest, the doctors declared him as dead at 1 : 04 PM on 25th of September.

In her tweet, Vanitha said that she used to ask actor Vijay to sing the most famous “Malare Mounama” song of SPB for her. With an initial reluctant, Vijay would sing the song for her sweetly, Vanitha says. “still remember how many times I used to ask Vijay to sing malare mounama song to me….he used to give me a nasty look coz I bugged him so much but sweetly sang it for me…memories” her tweet read.

I still remember how many times I used to ask @actorvijay to sing malare mounama song to me….he used to give me a nasty look coz I bugged him so much but sweetly sang it for me…memories #SPBalasubrahmanyam

This tweet from her received mixed reactions from her followers. Many of the questioned the connection between SPB and the incident shared by Vanitha.

Are you trying to pay a tribute to SPB.?? You could talk about the direct interactions with SPB. Why include vijay??? To woo his fans???
Ninga spb ah vechu, vijay fans kum kokki podura mari iruku.. idhu oru kedukketta pozhappu.

What’s the relation between spb sir’s demise and ur tweet?? Why do u drag Mr Vijay in this? Attention seeker like that moron meera Mithun.Both have to see a psychiatrist immediately

Are you trying to pay tribute to SPB or to woe Vijay's fans here? Stop clinging on to another person's success. If ur so fame hungry, get it on ur own without bringing anyone's name. It's a pity that even at this age ur so attention seeking. Get a life !!!!

However, vanitha replied to one of these comments saying that it is her memories with SPB’s songs. “I haven’t been close to spb sir..we weren’t family friends unfortunately and I’ve never worked with him..know his son that’s it…so not much..I’m ofcourse a fan” her reply read.