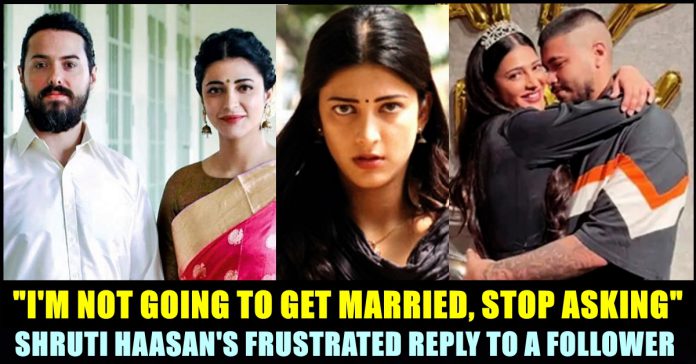 Pan Indian Actress Shruti Haasan conducted a question and answer session with her followers in Instagram and answered to some of the weirdest questions that were asked to her. The actress, keeping her nerves on check, carried a subtle humour throughout the chat session, even to a follower who asked whether the actress “Poo*ed” on that day. A follower asked when the actress is going to marry and another one asked her to choose between “Food” and “Sex”. She also talked about how to get rid of toxic relationships for the wellness of mental health while answering to one of her followers.

Being a daughter of India’s popular iconic celebrity, Shruti Haasan earned herself a name through sheer hard work. She happens to be one of the most active celebrities in social media platforms as well. Having more than 1.7 crore followers in Instagram and 70 lakh followers in Twitter, Shruti never missed to engage her followers by uploading pictures from her photo shoots and by conducting chat sessions with them frequently.

After appearing in couple of her father’s films as a child artist, Shruthi Haasan made her Tamil debut as heroine 7 aam arivu and continued to act in 3 with Dhanush, Vedhalam with Ajith Kumar, Puli with Vijay etc. She is also acting in other language films, mainly in Telugu. On Thursday, the 35 year old actress spent some time with her Instagram followers and answered to many of their questions.

When a follower asked Shruthi to choose one over food and sex, the actress replied saying “What is up with this question ? I would like to see you live without food. Just try it. OK. Just go on, go on as long as you can live without food.” She further indicated that no one will die if they don’t have sex in their life. Check out the video :

To another weird user who asked whether the actress pooped that day, Shruti replied “Oh my god, that is such a great question. I had the best poo in the morning as well. So I was like “Oh you are on time”. It was great. Thanks for asking”

While answering on how to deal toxic relationships, Shruti said “I would advice Don’t deal with toxic relationships because that stuff drains you faster than anything else on planet earth. Be polite to the toxic person and as much as be very kind to yourself and bounce”

Comment your views on these answers provided by the actress !!