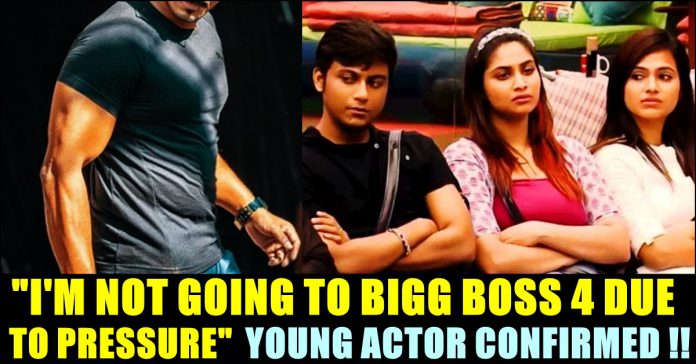 Actor Azeem who was expected to enter the Bigg Boss house as a wild card contestant, confirmed that he is not going to participate in the Kamal Haasan hosting show on Thursday. He uploaded an Instagram story to make this update in order to let the followers of the show to know about it. Azeem cited pressures and issues as reasons for his decision.

Azeem was expected to enter the Bigg Boss house that is located in EVP World in Chembarambakkam, Chennai on or before the 45th day and he confirmed the same through his Instagram account. Azeem made his acting debut in the Tamil television serial “Maya” along with Vani Bhojan, directed by B.Nityanandham and produced by Sathya Jyothi Films. He also acted with popular television actresses like Niranjani Agarwaal, Roopa Sree, Sivaranjini, Preethi Kumar, Haripriya, Shivani Narayanan and Meghna Vincent. He gained widespread acclaim after appearing in Pagal Nilavu, Priyamanaval and Dheivam Thantha veedu.

Azeem paired with Shivani Narayanan in Pagal Nilavu serial and they enjoyed a separate fan base in social media platforms during their stint. The news on his entry into the house left fans to speculate on how Shivani is going to react. However, Azeem made it clear that he not going to enter the house.

“Guys, I am not going to Bigg Boss 4 due to pressures and issues. That’s all I can say now. Sorry to disappoint my lovable fans and friends whom I owe a lot. Thanks for all the love and support you guys showered on me. See you all soon in screen. Love you all” his story read.

Earlier, Azeem posted a story saying that his mother happened to face an accident. He said that his mother had a severe fracture on her right leg and was hospitalised. “By the grace of Almighty and prayers of all the good hearts she is recovering now and soon she will be completely fine.” said Azeem and thanked his followers for their unconditional love.

Before that, while requesting his followers to report the fake accounts in his name, he wrote “Expected the unexpected”, a caption that is being used in Bigg Boss season 4 and added a heart emoji followed by a “Soon” with eye emoji which is meant for Bigg Boss show. Now, his confirmation on not entering the house, has disappointed the fans.

Previous articleKumaran Released A Video Shedding Tears For Chithra !!
Next articleA.R Murugadoss Is Trending In Social Media After The Official Announcement Of “Thalapathy 65” !!