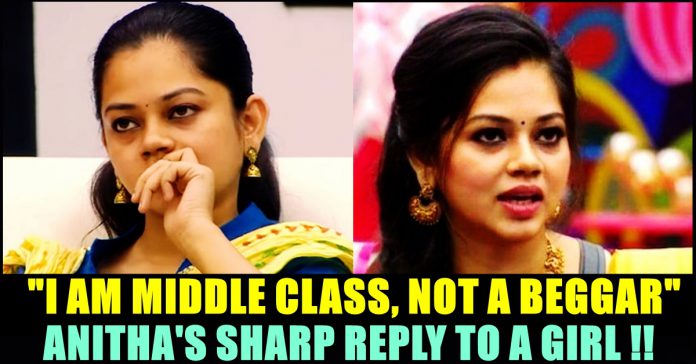 Anitha Sampath who rose to fame among mainstream audience through her Bigg Boss stint, is currently busy uploading videos in her youtube channel “Anitha Sampath Vlogs”. Through the channel, the actress is updating her subscribers about her life style, Bigg Boss experience, upcoming works etc. On seeing one of her most recent videos about “Recreating Bigg Boss make up”, a follower asked Anitha how she is using such expensive products by being a woman from a middle class family.

Anitha captured screen shot of the message and uploaded it in her story to answer her and people who have similar question. She who got irked by the question, said that the question shows how some people lack maturity. The former news reader said that she indeed hails from a middle class family but not a beggar and suggested her followers to use quality products for their skin.

Anitha Sampath, a news reader by profession, is currently running a youtube channel. She is very much involved in interacting with her followers by answering to their questions regarding the reality game show, her personal life etc. Ever since coming out of the house, the actress is facing so much abuse and hate from the users of Instagram. She also exposed a number of abusers and people who sent inappropriate texts to her in Instagram through fake ids in social media.

On Thursday, Anitha uploaded a video in her youtube channel titled “Biggboss Makeup Tutorial, Most Requested Video” and shared it in her Instagram as story. The video garnered 1 Lakh views in no time and received several kind of reactions from her followers. One of her follower asked how she managed to buy such costly make up items by being a girl from a middle class family. “How are you buying such products ?” the follower’s message read.

Irritated by the message, Anitha said that it shows the immaturity and foolishness of people. “It seems that they couldn’t think of myself as a middle class girl who struggled and went to Bigg Boss house with sheer hard work. Feeling sad for the new middle class generation girls. The world will only question you but will never appreciate. Achieve success by surpassing them” said Anitha and answered to the Insta user by seeing that she is a middle class woman but not a beggar. “Always use quality products for your skin” she said.

Check out the screen shot of Anitha’s story below :

Previous articleChennai Doctor Got Fired After Sending Inappropriate Messages To His Patient !!
Next articleOviyaa Trolled Modi & His Government With A Single Reply !!

Imran Tahir Describes Dhoni’s Terrific Innings In His Very Own Style !! Check Out !!

An MSD special is no longer as frequent an affair as it used to be in the early 2000s. But Mahendra Singh Dhoni turned...

In the last season of Bigg Boss show, a contestant named as Saravanan who is a well known actor among Tamil cinema audience, was...