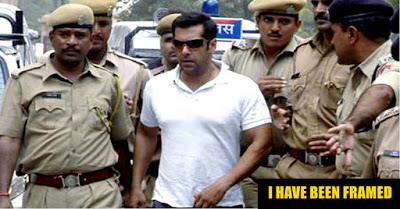 Salman Khan has claimed innocence in a 1998 case linked to poaching of two blackbucks in Rajasthan.The actor rejected all allegations levelled against him during hearing in a Jodhpur court today. A total of 65 questions were put before Salman, who said that he was being falsely framed by the forest department.

Salman Khan told a court in Rajasthan today that he has been falsely accused of killing blackbuck deer during a film shoot in 1998. “I am innocent,” he reportedly said in a Jodhpur court where his co-stars Saif Ali Khan, Tabu, Sonali Bendre and Neelam were also present as co-accused.

“I do not know, I was not there. This case is a cooked-up case,” replied Salman when asked who was driving the jeep. The actor said that the forest department tried to frame him in the case to gain publicity.

Salman Khan has faced four cases over the years linked to the killing of two blackbuck and two chinkara in the alleged deer hunt while filming the movie “Hum Saath Saath Hain”. The other actors are accused of instigating him. Salman is an accused in the case along with his Hum Saath Saath Hain co-stars Saif Ali Khan, Neelam, Tabu and Sonali Bendre.

Last week, Salman Khan was let off in an Arms Act case linked to the poaching. He was accused of keeping and using an unlicenced weapon but the court acquitted him of the charge, giving him the benefit of doubt based on weak evidence. We also remember how Salman Khan has evicted himself from the infamous hit and run case filed against him back in 2002. We also have no information why PETA hasn’t opposed this case yet.

Irfan Pathan who earlier faced the wrath of Dhoni fans for criticizing him, now posted a tweet in Tamil language to console them after...