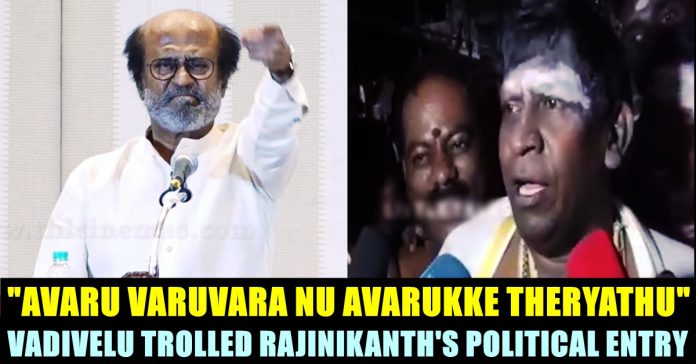 After a very long time, comedy actor Vadivelu interacted with media in a temple after offering his prayer. Surprisingly, he answered to a question of reporters on Superstar Rajinikanth’s political entry. The Superstar actor has attended his first ever official press meet after his announcement on his political entry. In his press meet, Rajinikanth said three important agenda of the party he is going to initiate.

Vadivelu said that he went to temple to pray for the entire world’s well-being. “I hope he (God) will make a way for my onscreen re-entry. No matter who are all working on preventing my on screen entry, God will make a way” Vadivelu said.

When he came to know that Rajinikanth has decided to select a separate candidate for chief minister post, Vadivelu said that it should be welcomed. “How big his statement is. Welcome it. He will do good to the state, right ? We will accept anyone who would do good for the state.” he said who further said that he is thinking of becoming a chief minister.

“Let me tell you my plan. In 2021, I am thinking of becoming a Chief minister. Many people are trying to stop it. You will vote for me right ? Then I am the CM” he laughs out loudly. Watch the video below :

Vadivelu is a veteran comedian in Tamil cinema who is not very much active in his field currently. Being one of the celebrated comedian among Tamil audience, Vadivelu is expected to be seen in several movies as solo hero. He is also committed in Kamal Haasan’s “Thalaivan Irukkinraan” in which he is going to reprise his role of “Esakki” in “Thevar Magan”.

Comment your views on this hilarious speech of Vadivelu !!

Due to this lockdown situation, cinema starts, especially heroines are conducting chat sessions with their fans and followers in social media. Meera Chopra who...

After the video of the youth cutting a cake, placed on top of a bike parked on the road, with a machete was shared...