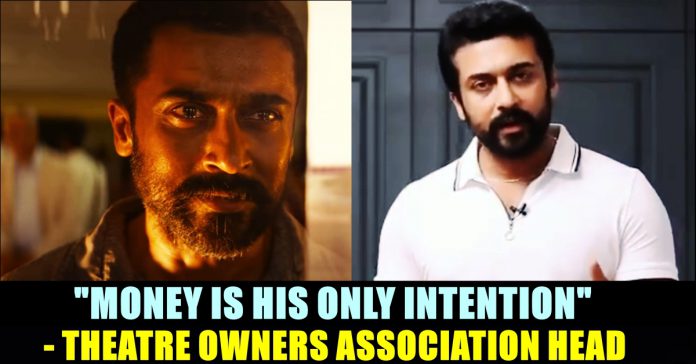 Followed by the mixed reactions for Suriya’s decision regarding his upcoming movie Sooarari Pottru’s release, renowned distributor Thirupur Subramaniam slammed actor Suriya. He who acts as the Tamilnadu head of Theatre owners association, owns a theatre named as Sri Sakthi cinemas. The “Petta” distributor, said that Suriya is kicking the ladder through which he climbed up.

The most awaited Suriya’s “Soorarai Pottru” film has been decided to get an online release by the makers of it. Announcing about it in his official twitter account, actor Suriya who also produced the movie, stated that the COVID 19 pandemic is the main reason behind his decision. The actor also pledged that he will complete acting in at least two films before the pandemic ends and will make people happy by releasing them in theatre. He also announced that he will be donating Rs.5 Crore to the people who are fighting against COVID 19 from the money he got for releasing “Soorarai Pottru” in “Amazon Prime”.

When Suriya announced that his film “Ponmagal Vanthaal” is going to released in OTT, theatres owners condemned him and warned him about banning his films from release. Now, Thiruppur Subramaniam came up with similar statement saying that the theatres of Tamil nadu will prefer which movie to stream post lockdown as Suriya preferred OTT over theatres.

Subramaniam asked what Suriya could have done if the film’s shoot was pending. “Let the theatres open after the pandemic. You are releasing your product as you have rights over it. We will decide which hero’s film should stream in our theatres post lockdown as we have complete rights over it” he said.

Tirupur Subramaniam also says that cinema theatres will not got out of trend as it is growing with the existence of Tamil rockers, Satellite Television channel etc. “We are not afraid of the growth of OTT platforms. It is this pandemic situation which worries us the lot. Only the films of these top tier actors would make audience to come to theatre when we open theatres. That is what we are worried about” he said. “If an individual acts as selfish, then he has to face the consequences” he added.

“The only reason for the OTT release of “Soorarai Pottru” is money. Their only aim is to earn money.” the distributor said. “I am facing 30-40 crores of loss per month due to this pandemic as I have to pay salaries to my employees and for theatre maintenance. Did I change my profession ?? Did I change my theatre into a marriage hall ??” he questioned. “Soorarai Pottru” is a film which is believed to be a biographical picture of Air Deccan founder G.R Gopinath, is touted to be a coming of age biographical drama. Directed by Sudha Kongara, the film has G.V Prakash as musician. It is notable that Gopinath is a retired Captain of the Indian Army, an author, and also a politician.

Comment your views on these statements of Tirupur Subramaniam !!

Sandy’s Wife Shuts Down Netizens Who Question About Her Mode Of Delivery !!