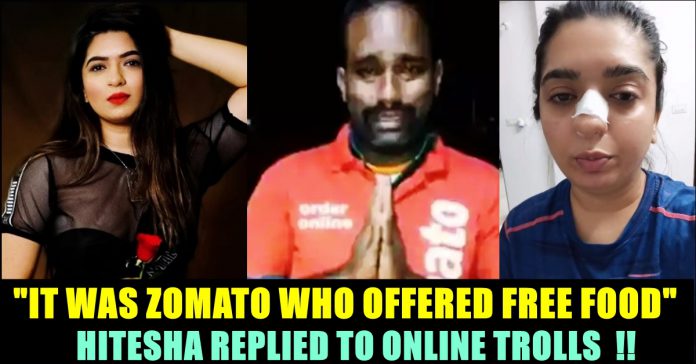 As soon as the reports on herself leaving Bengaluru due to the case filed by the Zomato delivery person surfaced, Instagram influencer Hitesha Chandranee came up with a social media post saying that she didn’t leave her house. Chandranee said that she has been co-operating the police officers and have not left Bengaluru. “Bengaluru is home for me” she said in her post and asked people in social media not to express any opinion until the trial is completed by appropriate legal forum.

It all started when Zomato delivery executive Kamaraj and Fashion influencer Hitesh Chandranee had a face off with each other during the delivery of food. As soon as the details on the incident broke out in social media, both the individuals came up their side of story which were opposite to each other’s.

The woman initially accused the delivery executive of physically hurting her and the man replied saying that he was hit with a slipper by her who also hurled abused at him and accidentally hurt herself while trying to punch him. “So guys, my Zomato order was late and I was talking to the customer care executive and meanwhile the delivery person just did this,” said Chandranee, crying and showing her bleeding nose in a selfie video, which was also aired by some TV channels. The police personnel arrested the delivery man after Hitesha’s complaint.

However, Kamaraj garnered immense support from the thousands of people in social media which includes high profile celebrities such as Parineeti Chopra and others. Recently, an FIR has also been filed against Hitesha based on a complaint by the Zomato employee in which he has accused her of wrongful restraint, assault, intentional insult, and criminal intimidation. Most recently, news reports suggested that Hitesha Chandranee has left the city as soon as the case was registered.

She also iterated that it was Zomato which offered free food if the delivery was made late not her. “Online narratives say that I asked for free food, but it was Zomato which had an offer that they would not charge me, the food was delivered late. People unconnected with the incident have been commenting without knowing the ramifications their words might cause.” She said in her post.

“The posts made by certain celebrities which accuse me of being responsible for the incident have hurt me immensely as these are the people I look upto. The comments of such people have an impact. There have been many attempts made through social media to pressurize me to withdraw the complaint. I am a law abiding citizen of India who firmly believes in the judiciary.” her recent statement read.

She also reported that she has been co-operating with the police and have not left Bengaluru as it is her home. Hitesha, through her post, said that neutral probe by the investigative agencies will bring out the “truth”. “I would not risk my life, reputation, respect and peace of mind by orchestrating anything as attributed to me. l appeal to all netizens not to express any opinion till the trial is completed by the appropriate legal forum.” said her post.

Sayyeshaa Or Sai Pallavi Who Is The Dancing Queen Of Kollywood ?? This Director’s Reply Will Make You Go ROFL !!

Sai Pallavi made headlines soon after her role as Malar in the Nivin Pauly starrer Premam. Every aspect of her life has been fodder for the...

Chennai Auto Driver Who Threatened A Man To Have Sex With Him Got Arrested !!

An alleged serial sexual offender named as Charles got arrested by Chennai Police after he forced an elderly man to have sex with him....