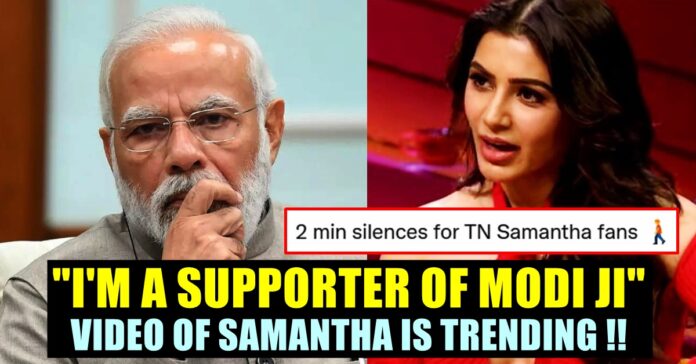 A video shared by a twitter user named Amit Shah that shows actress Samantha Ruth Prabhu identifying herself as a supporter of Prime minister Narendra Modi is trending in the social media platforms. The video interviews which were seemingly shot years ago, Samantha says that she hoped Modi to bring an impactful economic progress in the country. The video is going viral now with various kind of reactions from the online users.

Samantha is basically born and brought up in Chennai, Pallavaram. Despite her mixed regional background, she has cited herself as a Tamilian. Samantha was schooled at Holy Angels Anglo Indian Higher Secondary School and then completed a degree in commerce at Stella Maris College, Chennai.

Debuting through a film named “Mascovin Cauvery” Samantha rose to fame after acting in films such as “Ye Maaya Chesava”, “Naan ee”, “Neethane Ponvantham”, “Kaththi” and many other films. Now, a video of the actress identifying herself as a supporter of Modi is trending in the micro blogging social media site.

“I have always been a great supporter of Modi ji and I am really happy with the things that he is doing” she says in a video. “I’m a Modi supporter. I just believe that there is some change that might come with his leadership and I believe that he will take the nation forward and there will be great economic progress” she said.

Check out some of the top reactions the video garnered :

Now, it all makes sense.😂 pic.twitter.com/bbK5JmuSSN

Yup . 1100rupees LPG ,progress gathaa… If she wasn’t becoming actor then she might have understood the pain of common man and woman. But now she is crorepati.

This would be different if you ask her this now, economical progress 😂https://t.co/LrEo3zyRWB

Before that she is jaggi follower 🤦‍♂️ https://t.co/V82fsHUK0U

~ when u know ur crush is a sanghi https://t.co/kkelFfZBmU pic.twitter.com/7z0VsSNplo

Don’t know why you all like these entitled pricks even at all. As long as they benefit off of genocidal maniacs, they won’t care beyond it. https://t.co/DpKoXNB6tE

😭😭She is a hidden sanghi some what. But the question is in which year she told this thing. https://t.co/iz007CGdqr

Previous articleTeam Bangladesh Getting Brutally Trolled After Getting Out Of Asia Cup !!
Next articleDada Played Spoilsport In The Advertisement That Involved Top Celebrities !!

Dance Choreographer Sridhar who is known for working with leading stars of Kollywood film industry, on Sunday, exposed the employees of Bharath Petroleum who...

Samantha’s Father Shared An Emotional Note About His Daughter’s Marriage !!

On Sunday, Joseph Prabhu, father of actress Samantha shared the pictures of her marriage with Naga Chaithanya with an emotional note. He said that...

Prasanna Thanked The Meme Creator For The Love He Is Receiving Now !! Check What He Has To Say !!

Actor Prasanna has seen better times in his career. From the silent-yet-sinister villain in Anjathey to a brainy banker in Naanayam, Prasanna has played...