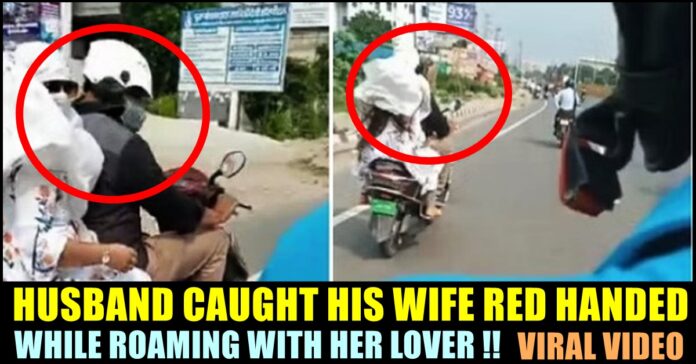 A video that shows a husband stopping a bike and involving in fight is going viral in social media platforms. It has been reported that the man has caught his wife red handedly while she was traveling with her lover in a two wheeler. The incident took place at Agra, Delhi and the video caused various kind of reactions in the internet platforms. 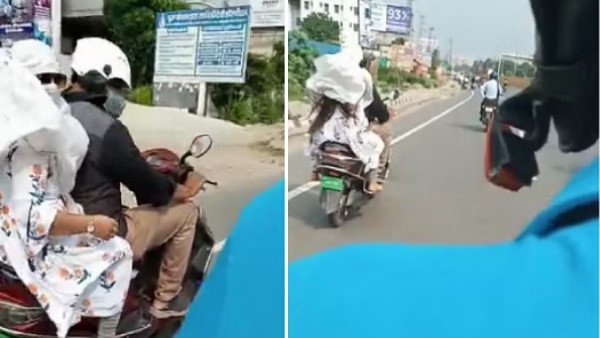 Reports suggests that the wife of the man living in Sikandra area had a love affair with the businessman. It has been reported that the couple even fought over the issue. On Sunday, when the wife left the home without informing, the husband decided to go and search for her along with her daughter.

He spotted his wife on a two wheeler with another man near Kailash Mandir Road. The high-voltage drama that unfolded publicly caught on camera and the footage has gone viral. According to reports, the husband slapped his wife’s lover multiple times before the police intervened. Both the men were fined for causing disturbance of the public peace, according to the report of Times now.

“That’s the problem of Indian girls. If you Love someone and your parents is forcing you to marry other guy. Please tell him truth before marriage and before ruining 3 life” said a social media user on seeing the video whereas another one said “It was better to happily divorce her wife and let her live happily with his bf”

Check out some of reactions below :

Problem of parents they can’t accept their children choice

cheating on partner after marriage is definitely wrong no matter who it is … but i agree that many Indian parents are over obsessed with getting their children married and then forcing them to have a baby asap. This really needs to change for good.

He should’ve slapped his wife also….I know a lot of people will say how can one slap a women? My question to you is how can a women do this to a guy? A guy also has feelings!!!

People who are blame parents are idiots or immature to understand the real world their are many men and woman having lovers who met them after marriage , cheating is choice don’t blame parents or your partner

This happen when you get married to wrong person 😀😆😆😆 https://t.co/R3olAtaNNM

Don’t know whom to believe
Even your own shadow will leave you. https://t.co/u2OnBdIwRd

“My Films Are Nothing In front Of This Film” – Director Mysskin’s Emotional Review !! WATCH

Director Mysskin, after watching the film "Kadaisi Vivasayi", released a video in his official youtube channel, saying that it is the most perfect films...