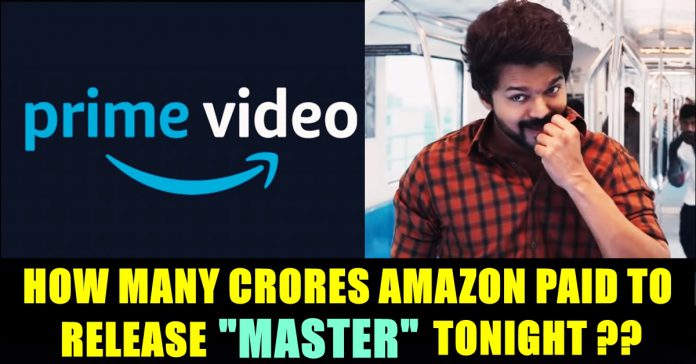 The update on the OTT release of actor Vijay’s “Master” came in as a shock to both fans and theatre owners. The film which was expected to get released in OTT platform after at least 50 days of theatrical run, is going to get streamed from the night of Thursday, most probably. It is the first time ever in Tamil cinema history that a film is going to get released in OTT platform on its 15th day from theatrical release.

Previously, Karthi’s “Kaithi” which was also directed by Lokesh Kanagaraj got released after 30 days from its big screen release. It is notable that Suriya’s “Soorarai Pottru” got released directly on Amazon Prime due to the COVID 19 outbreak. Now, a buzz on the amount paid by Amazon to stream “Master” sooner has been surfaced.

The film, had Vijay, Vijay Sethupathi, Malavika Mohanan, Arjun Das in the lead roles. The report on the film getting released after 15 days of theatrical release has left the ardent fans of actor Vijay in a confused state. However, it has been discovered that the film is getting released sooner due to the audience who are residing in foreign countries as they couldn’t witness the film in theatres due to COVID 19 protocol.

Vijay Sethupathi and Lokesh kanagaraj also felt happy as the film is going to reach wider audience with this OTT release. Vijay Subramaniam, director and head of Amazon Prime video in India said that “Master” is one of the most anticipated films of the year. “With this digital premiere, we are happy to provide customers with the choice of enjoying the latest Tamil blockbuster movie from the safety and comfort of their homes, not just in India but across the globe,” Vijay subramaniam said in an official statement.

Now, a report of Valaipechu youtube channel has revealed that both authorities of Amazon Prime and the producers of “Master” were involved in a bargain before making the important decision. Bismi, one of the journalists had said that “Master” had collected Rs. 110 crores in the two weeks and the producer received Rs. 60 crores as his share. “After knowing that the footfall for the film got decreased during the third week, he was informed that he would receive a share of only Rs. 4 crore maximum”. Bismi said.

“Initially, it was agreed by both the parties to stream the film on Amazon Prime after 21 days of theatrical release. However, Amazon approached Producer Lalith and asked him to sell the film to release on 29th of January (Evening of January 28). Lalith demanded Rs.20 crore from them to release the film sooner than the fixed date. After a discussion, they both agreed with Rs. 16 crore as the final amount.” Bismi added.

Earlier, prior the release of the film, a report of Vikatan youtube channel said that Amazon Prime bought the film “Master” for Rs. 15 crore. Read : Amazon Prime Bought Vijay’s “Master” !! Check How Many Crores They Paid !!. Going by these reports, Amazon totally paid Rs. 31 crores to buy “Master” to the producers of it.

The most awaited Vijay’s “Master” released on theatres in Tamil nadu ahead of Pongal Festival and the fans of Tamil cinema celebrated it as the biggest event with extreme happiness as they were going to witness a proper mainstream feature film of a top tier Tamil actor after nearly one long year.

After setting a target of 210 runs in the first innings, team Chennai Super Kings lost the match to Lucknow Super Giants due to...

K.S Ravikumar is one of the most experienced filmmaker of Kollywood film industry. In a career spanning around 30 years , he has directed...