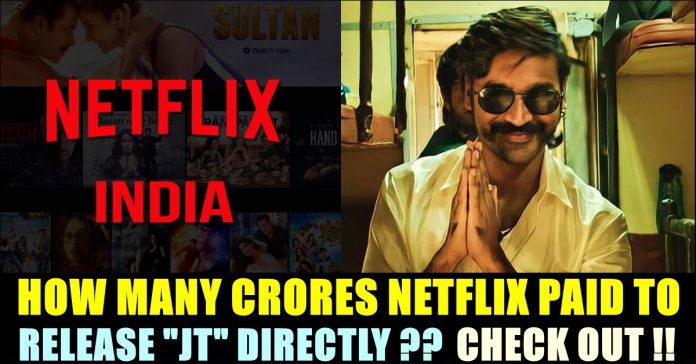 How Many Crores Netflix Paid To Buy “Jagame Thandhiram” ?? CHECK OUT

Producer Sashi Kanth released the teaser in his official twitter account announcing that the film is going to be a direct Netflix release. Fans got very much impressed with the teaser but actor Dhanush who made the announcements of his upcoming films such as “Atrangi Re”, “Karnan” in his official twitter account, avoided sharing the teaser of “Jagame Thanthiram”. This left the fans extremely dejected who are expressing their emotions in social media platforms.

The teaser which opened by revealing the character name of the lead, gave us a hint on the characterization of Dhanush who played “Suruli”. The man who hails from village seems to be a pro in making country bombs. His witty one liners and mere presence makes the people around him happy. But what happens when he visits abroad and starts making business with the real gangsters is what we have to wait for.

Now, a report of Vikatan youtube channel has revealed about the trading details of the film. They said that the Karthik Subbaraj directorial was made of a total budget of Rs. 60 crore. The film reportedly got sold for Rs. 55 crore to the online streaming platform Netflix India. The satellite rights of the film got acquired by Vijay TV for Rs. 15 crore. The film’s digital and satellite rights has earned producer Sashikanth a total of Rs. 70 crore approximately, according to Cinema Vikatan.

Sashi’s Y not studios would earn more if the film gets remake offers from the film industries of the other languages, the report said. The makers are also planning to release the film in Netflix India on the 1st of May, it added. However, we have to wait for the official announcement from Netflix and Y not studios.

“@StudiosYNot is super excited & proud to be partnering with @NetflixIndia to bring forth #JagameThandiram , a Tamil content to the global audience. We continue to back bold initiatives & ideas fearlessly.” Producer Sashi kanth wrote in a tweet while releasing the teaser.

🟧 @StudiosYNot is super excited & proud to be partnering with @NetflixIndia to bring forth #JagameThandiram , a Tamil content to the global audience. We continue to back bold initiatives & ideas fearlessly. #proudofynotstudios https://t.co/eyzY4Locv6

However, actor Dhanush avoided releasing the teaser in his twitter space as he already expressed his wish of “Jagame Thanthiram” getting a theatrical release. He wrote “I am hoping for the theatrical release of Jagame Thandiram like the theatre owners, exhibitors, distributors, cinema lovers and most of all my fans. Fingers crossed” on the 2nd of February.

Vaughan Criticized India’s Decision Of Not Including Kuldeep Yadav !! Check The Replies He Received

India ended the day one of first test against England by picking up just three wickets and conceded 263 runs. England captain Joe Root...