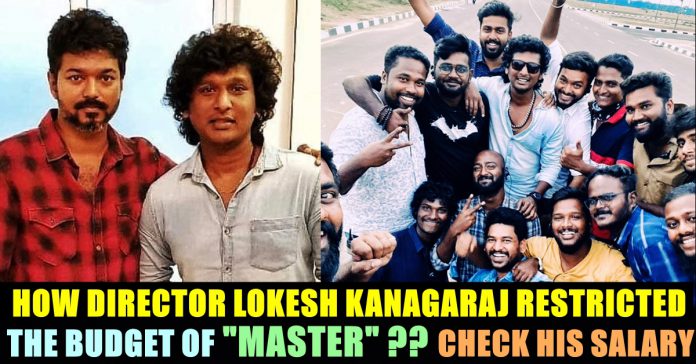 Being one of the most happening filmmaker of Kollywood right now, Lokesh Kanagaraj has started working on the pre-production of his next venture in this lockdown, says sources. The filmmaker is rumoured to direct Superstar Rajinikanth in his next under Kamal Haasan’s Raj Kamal Productions. The film is going to see the epitomes of Tamil cinema together for one last time it seems. Its been just 3 years since his debut but the filmmaker has already became one of the most important part of Tamil cinema, especially among the new gen filmmakers of Kollywood industry. Now, what is that special quality Lokesh Kanagaraj contains to gain this special spot in the 89 year old Tamil cinema with having just 2 films released theatrically ?

Lokesh Kanagaraj who debuted through “Managaram” of producer S.R Prabhu, grabbed the attention of Tamil audience through his first film itself. During the final stages of the post production work of his second film “Kaithi”, Lokesh got this opportunity to direct actor Vijay, one of the very few highest paid actors in Indian film industry. After impressing the “Bigil” star with his intriguing script, Lokesh Kanagaraj decided to cast the busiest Vijay Sethupathy in the antagonist role. While emerging filmmakers are dying to direct any one of these stars in their film, Lokesh managed get both of them on board for his third film.

Actor Vijay, whose previous movie “Bigil” was made of a whopping amount of Rs.180 crores, was expected to appear in a higher budget film this time. But when the makers of “Master” approached Lokesh Kanagaraj to quote a budget for the 64th film of Vijay, the director required just Rs.30-40 crores to finish the whole film. Considering the budgets of Vijay’s previous films and his market value, the producers asked Lokesh to widen the project and offered him a larger amount as budget. But the “Kaithi” maker adamantly refused to do so. He reportedly said that he only wants what the content of his film requires.

The filmmaker who got committed to the project with Rs.1.5 crores as salary, received Rs. 2 crores from actor Vijay as compliment after completing the project successfully. Vijay, reportedly received Rs.80 crores as his salary for working in “Master”. The film which was supposed to release on 9th of April, got postponed due to the Coronavirus which killed more than 1 lakh people across the world. So far three looks of the film has been released and the lyric videos of Kutti Story, Vaathi Coming, Antha Kanna Paathakka are trending in youtube. The makers are planning to release the film on the birthday of actor Vijay which is 22 of June.

Lalith Kumar of Seven screen studios bought the film “Master”, sold 15% lesser than “Bigil” to the distributors. However, as the film got postponed without further notice, the biggest question marks now are, will the market of actor Vijay remain the same even after the lockdown ?? Will “Master” and other movies which are waiting to get a theatrical release, garner footfalls as before despite of the lockdown crisis ?? Well, we have to wait few more days to witness what happens as the Indian government has extended the lockdown till 3rd of May !!

Lawyer and Political strategist of Kamal Haasan, SB Arjun opened for the first time about what really happened in the counting hall on 2nd...