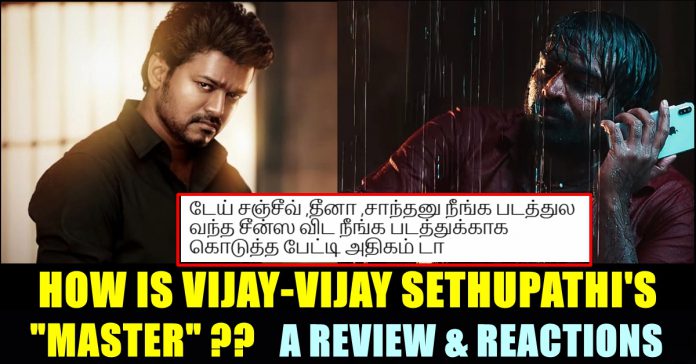 The most awaited Vijay’s “Master” released on theatres in Tamil nadu today and the fans of Tamil cinema are celebrating the biggest event with extreme happiness as they are witnessing a proper mainstream feature film of a top tier Tamil actor after nearly one long year. Reviews and reactions for the Vijay and Vijay Sethupathi starrer are pouring in Internet from all the directions from fans and celebrities.

The typical Tamil cinema cat and mouse action thriller sees a new age filmmaker trying his hand at mainstream commercial cinema for the first time in his career by having a mass hero in the lead. Though the film would satisfy a fan of actor Vijay, it fails to create the thrill which is being attempted in the 179 minute long feature throughout.

The very usual intermission and the familiar trope of the villain gang going after the hero’s loved ones are indeed boring. The scene where Vijay and Andrea wielding bow and arrows doesn’t offers any thrill as we very well know that the hero is going to win the battle at the end. Many supporting characters which doesn’t have proper arcs in the film makes us wonder whether the film was made by Lokesh or Atlee.

However, the presentation is appealing and the message conveyed in the film doesn’t sounded preachy which is one of the biggest positives of the film. As usual Vijay Sethupathi wins the audience with his “devil may care” attitude. The aura created by Vijay whenever he appears on screen and his performance in the climax fight were top notch which will be a treat to the fans of him.

Check out some of the reactions for the film from fans and celebrities :

#Master is Vijay & Lokesh Kanagaraj’s #Petta. Engaging commercial cinema that is a celebration of its lead star. Nothing more nothing less. Whether that is glass half-full or glass half-empty depends on how much of a fanboy you are of the actor and/or the director.

#MasterFilm is full of style but no substance , a pure wasted opportunity for Lokesh. A routine & predictable cat & mouse tale with Charming lead roles. One time watchable stuff, can be enjoyed if you don’t have any expectations on it. pic.twitter.com/489aNoRIAZ

Many inventively designed mass moments. A clever central thread of two characters hurtling towards one another. Many laugh-out-loud moments. An almost mythical villain. An in-form Anirudh.

And yet.
It all does not come together to form a consistently good film.

After accusing a dermatologist for scarring her face, Actress Raiza Wilson uploaded a series of her selfie pictures in her official Instagram account asking...