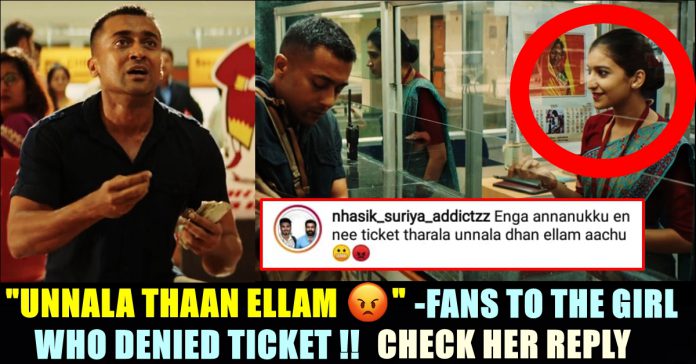 Real success of a film is when it makes people who are watching it forget that they are watching a fictional story. True victory lies when it makes audience cry when the protagonist is crying and make them laugh when he is laughing. The recently released “Soorarai Pottru” is one such film as many people who watched it confessed that they shed tears when Suriya struggled in the film. Some of them got attached with “Maara” too much as they started abusing the antagonists of the film. Most recently, actor Vijay Devarakonda, after watching “Soorarai Pottru” said “Fu*K people like Paresh Goswami” in his tweet to express his anger.

I dont know how much is true and how much fictionalised – so ordering the book #SimplyFly to read more about Captain's journey… Also Fck people like Paresh Goswami 🙂 Definite watch in Telugu or Tamil – cheers!

Now, a number of fans flooded the social media posts of actress Alysha Melani with their comments for not giving flight ticket to Suriya when he needed it the most. In the film “Soorarai Pottru”, Maara (played by Suriya) would decide to start airlines that is affordable to simple people after failing to attend his father’s funeral due to an expensive flight ticket.

Maara would enter airport with Rs.6,000 to travel in economy class to reach his hometown. He who wants to see his father for one last time before he dies, would get dejected after knowing that the tickets for the economy class are filled. A woman in the counter would return the 6,000 to Maara and would deny giving him the ticket as the business class ticket cost Rs.11,200.

Helpless Maara would do everything that he could do to get money from the people in the airport. However, no one will respond to his request which will make him miss his father’s funeral. This incident that took place in his life, would push Maara to go beyond limits to start a new airline of his own.

Alysha Melani, the model who acted as the woman in the counter, uploaded a social media post, cherishing the moment she shared screen space with actor Suriya. Check out her post below :

Now, after finding the social media account of Alysha Melani who appeared in the film as the woman in the counter, several fans expressed their emotions for not giving ticket to “Maara” in the film. “How cruel you are” wrote a follower whereas another one said “Enga annanukku en nee ticket tharala unnala dhan ellam aachu😬😡”

Replying to their comments, Alysha who won Miss Chandrapur 2016 and Miss Maharashtra icon 2017, posted a story in her Instagram account writing “Aww, next time for sure I will give the tickets”