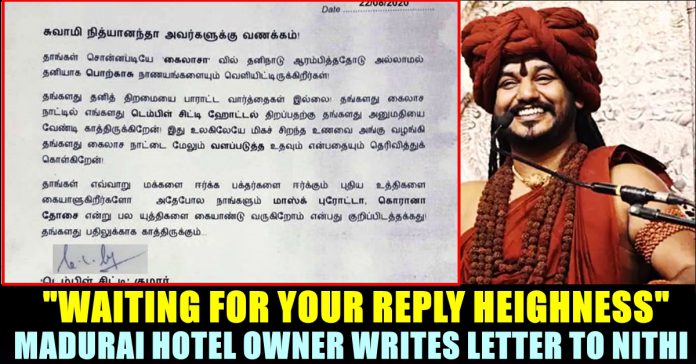 A self proclaimed godman and a fugitive rape accused Nithyanantha has been making the headlines for past few days for different reasons. While the entire world is suffering to cope up with the current situation of COVID 19, Nithyanantha will be celebrating the launch of “Reserve Bank Of Kailasa” with his followers in a small island off the coast of Ecuador which is located thousands of kilometres away.

After failing to appear in 50 plus court hearings, Nithyananda fled to the so called nation named as “Kailasa” in which he appointed himself as a Prime minister. The name of this so called nation has been in existence since the November of last year. The exact location of the island is unknown and Police reports suggests that is a small island that Nithyananda purchased off the coast of Ecuador.

However, Ecuador has rejected the claim saying that none of its island was bought by the fugitive, who claims himself as a God’s incarnate. “I am not a Hindu reformer. I am a revivor” he can be seen saying in his latest video in which he announced the date of the launch of his “Reserve Bank”.

“I have a great announcement. On the occasion of Ganesh Chathurthi, with the grace of Ganapathi, we are going to reveal the complete details of the Reserve bank of Kailasa and the currency of Kailasa. It is all ready. I am just waiting for the auspicious day” he said.

Nithyanandha also said that he have designed a 300 page “economy policy” for his nation and its “reserve bank”, that he says will be structured on the lines of the Vatican bank.

Mr Kumar, owner of a hotel named as “Temple city” which is located in Madurai, has wrote the letter to Nithyanandha. He who lauded Nithyanantha for his achievements as a Prime minister of “Kailaasa”, asked permission to open the hotel in “Kailaasa”.

He said that he will strengthen “Kailaasa” by providing world’s best food. “Similar to you, I also invented new tricks to attract people such as making Mask Parotta, Corona Dosa and others creative food items. I am waiting for you answer” Kumar said in his letter.

Check out his letter here :

While many people making of him, the self proclaimed godman is serious about it. Even since he managed to escape from India, he has been working on “building his own country”. The country’s website www.kailaasa.org introduces the country as “The greatest Hindu nation” with an aim to revive an “Enlightened civilisation”. Meanwhile, a letter from a Madurai hotel owner who proposed to initiate a Hotel in Nithyanantha’s “Kailasa” is trending in the Internet.

Comment your views on Kumar inaugurating Temple city in Kailaasa !!

Previous articleAtlee Spent Rs.95 Lakh Only For The Story Discussion Of This Movie ??
Next article“Meera Mitun Has Became A Brand Now” – Madan Gowri !!

Kings of Comedy Juniorsis a 2017 Indian Tamil language stand-up comedy reality television show, which aired on Vijay Tv From on 8 April 2017 to 17...

This Contestant Got Evicted From Bigg Boss House This Week!!

Season 6 of Tamil Bigg Boss show is nearing it's end and the number of contestants who got participated are decreasing in weekly manner....