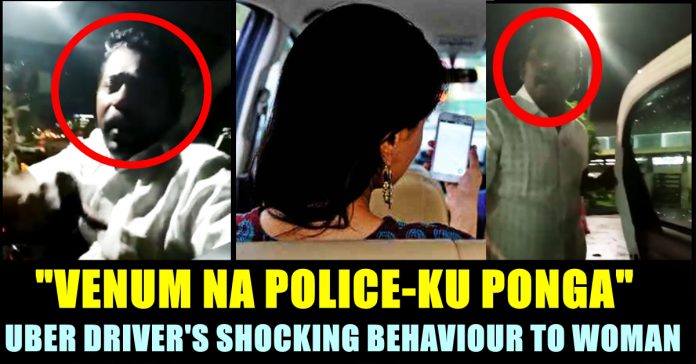 India is not a safe place for women and a lot of recent instances bear testimony to this statement. From getting catcalled in broad daylight to being harassed by cab drivers, women in India have been going through a lot for a very long time, and the situation only seems to be getting worse.

In this recent video which was surfaced, a cab driver was seen shouting at a woman who is sitting with her child in his cab. He refuses to drop the woman at her destination after accepting the ride in the app. The woman who says that she is waiting for 1 long hour to get a cab, asks him to drop as she has a 2 year old child with her.

“It was raining and no cabs were accepting rides or were asking me to be cancel if assigned. I had been trying from 7PM and around 7:30PM, one uber cab was assigned. I called the driver and he said he in on the way, there is heavy traffic and so will take some time to reach. I said okay and waited.

By the time he reached, it was 8PM. I got in, kept the bags and settled with the child. He then asked me where the drop location is. When I told him the place, he said he can not go. He said he can’t get out of the IT park itself coz there is heavy traffic inside itself.

I told him wherever he wants to go from here, he has to cross this traffic anyways and asked him why he did not say this when I called him 20-25minutes ago when his cab was assigned. I said it is not fair that he made us wait for so long and then refuses the ride; he could tell me earlier and I would have booked another cab.” the statement of the facebook post read.

The woman also paid 45 Rs as the ride was cancelled by the driver. Though after leaving a feedback about this incident, no uber authority has reached the victim yet regarding the issue.

Normal people will be more friendly when they see a mom with a small child, but not this guy. If this person can do this to a mom and child travelling alone at night, he could do anything and he could even hurt anyone without any empathy or moral conscience. the facebook post of the woman read.