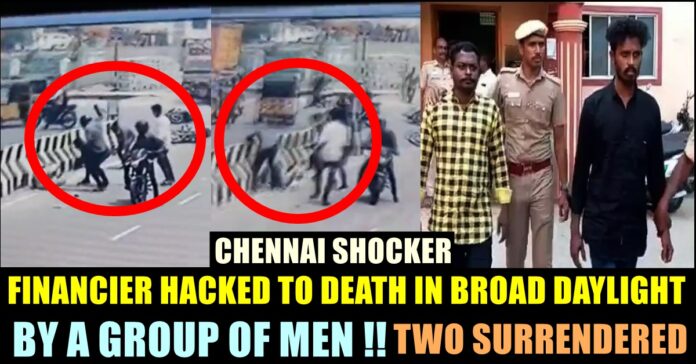 A CCTV video footage of an individual being brutally murdered by a group of men in broad daylight at Aminjikarai of Chennai city had sent shock waves to the public. The victim has been identified as an Aarumugam who was running a finance company. Police had said that he was having 6 cases pending against him and suspected that he would have been killed by someone whom he cheated. According to latest reports, Two men surrendered in Kallakurichi court admitting to have committed the crime.

On Wednesday, May 18, Aarumugam was hacked to death by a group of four men. The 36 year old had 6 different cases pending against him. Police officials said that Aarumugam was murdered while he was on his way to the office with his another worker named Ramesh. The six cases that were filed against Aarumugam consisted a murder, assault and a harassment of a woman.

A senior Police officer said “Aarumugam was arrested 6 years ago for sexually harassing a woman at knifepoint in front of her husband” and said that he could have been killed by someone he had wronged.

The incident happened around 1 : 30 PM on Wednesday, according to Police reports. “Four men on two bikes intercepted Arumugam near Pulla Avenue and hacked him with machetes even as vehicles were passing by” the police. “The gang spared Ramesh who escaped with his bike later” they added.

It has been reported that Police tried to save Aarumurgam by rushing him to the Kilpauk medical college hospital but the victim died without responding to the treatment. Chennai Police have registered a case of Murder and has initiated an investigation.

Recent report suggested that two men named Chandrasekhar and Rohit Raj has surrendered in Kallakurichi court and accepted to have killing the financier. Judge Kannan has ordered the accused to be lodged in Kadalur central jail. Police are currently involved in finding the other accused and also investigating on why the murder has been committed.

South Indian actress Manjima Mohan who is known among Tamil audience for debuting through a film named "Achcham Enbathu Madamayada", conducted a question and...

Vijay TV Made A Meme Out Of BIGG BOSS To Make People Laugh !! Followers Got Irritated, Thrashed Left & Right !!