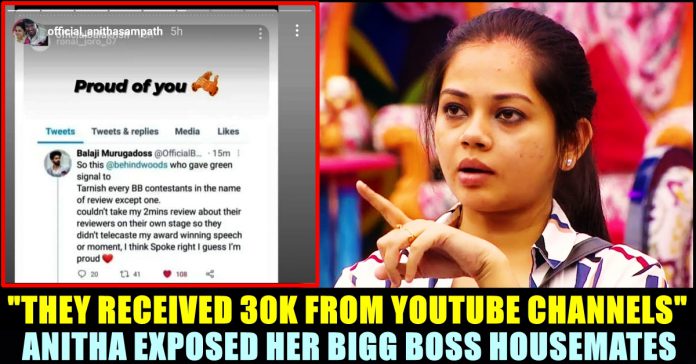 After Balaji Murugadoss returned the award he received from Behindwoods youtube channel, Anitha Sampath, his Bigg Boaa housemate extended her support by uploading a story in her official Instagram account. Anitha also exposed about the contestants of Bigg Boss house receiving Rs. 20-30k from youtube channels to talk controversial content.

Recently, Bigg Boss fame Balaji Murugadoss came up with a series of tweets expressing his disappointment over popular youtube channel “Behindwoods”. He who received “Biggest sensation on reality Television award” at Behindwoods Gold TV & Digital awards, said that he is returning it. Through the tweets he had posted, it could be understood that the model got upset over the channel not telecasting his award winning speech or moment. Tweets of the Bigg Boss season 5 runner up suggests that he had spoken something about the Bigg Boss reviewers of the channel.

Extending her support to Balaji Murugadoss, Anitha uploaded a story in her Instagram account saying that their mask will fall off soon. She further said that paying 30k to each contestant to demean other contestants will also come out soon. “Soon their face mask will fall off !! Other contestants ah mattama pesa aaluku 30k kuduthu interview edutha matter um sikram veliya varum. Proud of you Bala” she said in her post.

“The biggest interlinked politics behind the trolls, abuses, interviews, reviews will soon be released. Just wait for it. This will continue in other seasons too if we dont put a full stop” Anitha said in her next post, while replying to a follower who texted her about few interviews of evicted contestants changing the perspective of the whole show.

In her next story, Anitha said that the honest contestants never appeared in youtube channels to give interviews. “Beside appearing, the honest ones never used filthy words against the contestants inside. Those who did that, did for money 20-30K” Anitha said in her story. “Due to the jealous of getting evicted soon, they would talk whatever they think to demean the contestants who are staying inside.” she said and added that they influenced people to reduce the votes of other contestants whom they didn’t like. Anitha thanked her followers for backing her up 85 long days against all the hatred she received from her co-contestants.

“Honest ones never gave interviews after elimination.. Apdiye kuduthalum dint use filthy words against the contestants inside.. Those who did that, Did for money 20-30k, Vaitherichal that they got eliminated soon Bb house kulla direct ah modha mudiyadha kolai.veliya vandhu nenachadha pesuvanga.. To influence people and reduce the votes.. so that pudikadhavangalum sikram eliminate aganum nu.. Against all that i stayed for 85days..which iam so proud of. thanku guys for standing with me…” her story read.

Anitha Sampath, a news reader by profession, is currently running a youtube channel named “Anitha Sampath vlogs”. She is very much involved in interacting with her followers by answering to their questions regarding the reality game show, her personal life, youtube channel etc. During her Bigg Boss stint, Anitha got appreciated by Kamal Haasan for her speech on superstition in India and how it demeans every women in the country. Her progressive speech impressed thousands of people and it made her to stay inside the house longer.