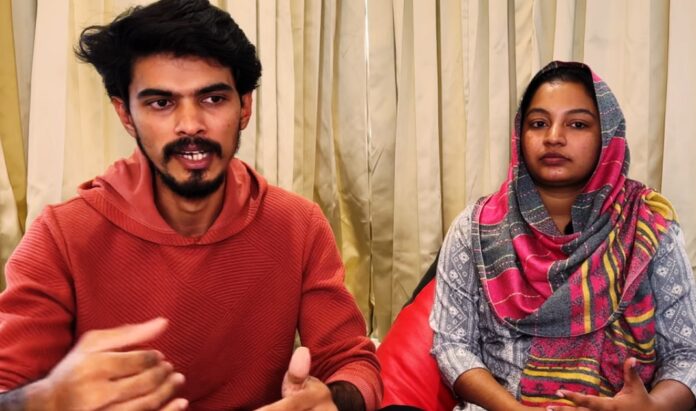 A home tour vlog uploaded by a 29 year old youtuber Suhail went wrong as he almost got robbed at knife point after a miscreant took notes of his video and went to his house to steal his belongings. The CCTV footages that were released in internet shows a youth invading the terrace of Suhail’s house and waiting till the morning to rob him. However, accused got caught and Police advised youtubers not to disclose about their personal information while releasing vlogs.

K. G Suhail and his wife Babina are living in Bichanur area under Chavadi Police Station limits, Coimbatore. They are running two YouTube channels namely “Suhail Vlogger” and “Cyber Tamila”. He is enjoying nearly 2 million subscribers for both the channels and has been engaging his followers by uploading various kind of videos. It has been reported that Suhail is leading a luxurious life by building a new house, two cars and two wheelers through his YouTube income.

Most lately, he released a home tour video for his newly built house in his YouTube channel. In the video, he talked about the facilities in his house, where it is located and other important details to keep his audience hooked up. On seeing the video, a youth from Pondicherry decided to rob the house by having the details Suhail provided him through his home tour vlog video.

The accused decided to execute his plan on 20th of January. He directly went to the terrace of Suhail’s house through the backdoor. He waited to enter the house after it gets dawn and the CCTV video shows him sleeping till that time. Around 6 AM of 21st January, the robber tried to enter through the back door.

Hari, Suhail’s close friend entered the house and found the mysterious man entering the house through the back door. The thief kept knife at Suhail’s neck and reportedly asked him for money. However, Suhail and Hari managed to catch him red handed and tie him up in their house before handing him over to the Police.

In the preliminary investigation, it has been found that the accused is a 25 year old Ani Raman from Pudhucherry. Anu Raman was working as an AC Mechanic and told to Police that he wanted to become rich soon as same as Suhail and decided to rob him.

Police officers said that Anuraman went to the house at midnight and didn’t want to execute his plan at that time as a result of which he started sleeping there till the morning. Police lodged the culprit in jail after producing him before a judge. They also advised Youtubers not to disclose their personal details in their Vlog videos which will lead to such crimes.

Previous article“Kamal Sir Did It With A Heavy Heart” – Bigg Boss 6 Contestant About The Result
Next articleKamal Haasan’s Tweet About “Aram” Triggered Bigg Boss Fans!!