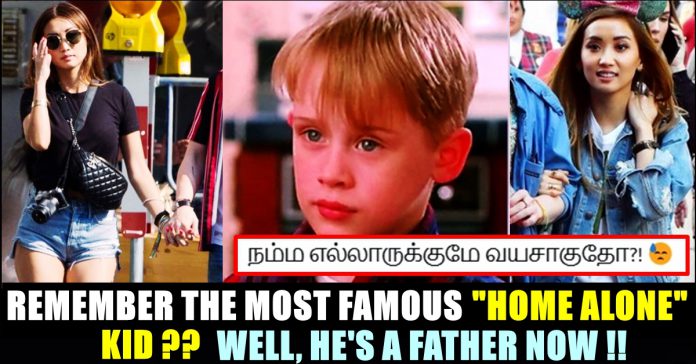 If you are still feeling young and hope for something better to happen in the future, here’s something that will make you feel older. Most popular Macaulay Kalkin who is gained universal fame by acting as a protagonist in the 1990 American Comedy film “Home alone” has became a proud parent and announced about his first child with his partner, Brenda Song.

The couple named their son as “Dakota Song Culkin” and welcomed him to the world last Monday. It is reported that the couple named their child in the memory of Culkin’s sister who passed away in the year 2008. The baby boy is healthy after weighing in at 6 pounds, 14 ounces.

Brenda Song, 33, and Culkin, 40, who both started their journey in showbiz as child actors, started dating back in 2017 after meeting on the set of Seth Green’s “Changeland”. In 2018, they moved in together. The duo always stayed away from media attention and hardly appeared in red carpet events.

People who grew up watching Macaulay as “Kevin” and as a kid in his classic Christmas movies and the Google holiday advertisements reprising his iconic roles, felt a bit taken aback after knowing about this news on himself becoming a proud parent. Macaulay was 10 years old when he played the role of “Kevin” in the 1992 sequel and now, he became father for the first time at his 40.

As soon as the news broke out in media, Internet users started making hilarious reactions, wondering when these two child artists grew up to an extend giving birth to a child. Check out some of their reactions below :

Ok but here me out. Have the kid be the star of a Home Alone reboot or sequel and have them play the parents. https://t.co/SSZdZ3d6K6

So your telling me that the kid from Home Alone and the rich chick from the Suite life of Zack and Cody just had a child! WTF 😂 @BKSTER19 @TOHbigDIEP99 @raccoon_wise @KilledThisLove_

Nah but why is Kevin from home alone having a kid with London Tipton, this will just remain a mad concept to me, people aren't allowed to grow up

so London Tipton and the Home Alone Kid just had a baby together. Yes you heard that correctly. pic.twitter.com/UOunFi5b0G

Previous article“Insecurity Is Not Good”- Trisha Fans Criticized Nayanthara !! WATCH
Next articleAishwarya Rai’s Look Alike Got Irritated On Seeing These Comments From Public !!

“Comparing To Janani, Her Sister Is Looking Too Good !!” Said Married Rio !! Check Out Fans Reaction !!

Bigg Boss gave a task where the contestants had to pin an angel or a devil badge on their fellow inmates. The angel badge was...