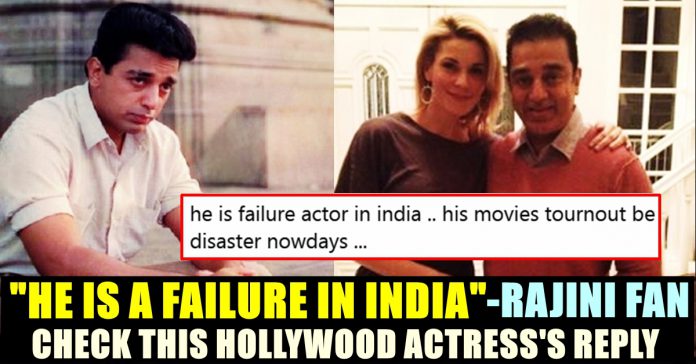 Mckenzie Westmore who became a familiar face among Tamil cinema audience for revealing her bonding with Kamal Haasan, now replied to a twitter user who spread hatred against “Makkal Needhi Maiam” leader. Mckenzie Westmore, daughter of academy award winning makeup artist Michael Westmore, few days ago revealed that Kamal Haasan is a family friend of her. She is known for her performance in the television show, named as Passions. She also acted in Martin Scorsese’s “Raging Bull”and in a film named as “Vile”. She remembered Kamal Haasan while replying to a twitter page which boasted Kamal Haasan’s make up skills.

“As a child I remember Kamal coming to the house bringing beautiful gifts from India! I was always in awe of him. Visiting him at his LA home was a dream too! I’ll find photos ” she replied to that Tamilnadu based page. Check out her first tweet about Kamal here :

Followed by this, Mckenzie went on to share a picture of herself with Kamal Haasan which captured few years back. She uploaded another picture of her childhood in which she and her father were seen donning Indian attire which was gifted by Kamal Haasan to them.

This reply of Mckenzie praising Kamal Haasan went extremely viral among the fans of Tamil cinema. In no time, McKenzie’s number of followers increased as the fans of Kamal Haasan started following her account. As we all know, we can’t expect 100% positivity in Internet. On seeing these tweets of Mckenzie, one of a twitter user whose bio says that he is a Rajinikanth fan, tried to defame Kamal Haasan through his replies to Mckenzie.

He said that Kamal Haasan is a failed actor in India and accused him of using American brand name for cheap publicity. He also said that Kamal’s movies would turnout as a disaster always through his comment. Shocked Mckenzie immediately replied by saying that she didn’t think that he is talking about Kamal Haasan. “Huh? I don’t think we are speaking of the same man. He’s a dear friend to my family and spoke with my dad just yesterday” he reply read.

Huh? I don’t think we are speaking of the same man. He’s a dear friend to my family and spoke with my dad just yesterday

However, the twitter user went on to bash Kamal Haasan. He said that Kamal Haasan’s political party was rejected by Indian people. “he is just a “waste LAND ” he said.

Here’s the screenshot of his profile and bio :

McKenzie gave him back by saying that she is going to ignore his tweets. “Please stop your slander as you’re speaking of a family friend!” Westmore requested him.

I’m going to just ignore your tweets before I repost to everyone. Please stop your slander as you’re speaking of a family friend!

Kamal Haasan who spent 60 years of his life in Indian cinema is considered as one of the biggest name in Indian film industry. He won more than 15 national awards and his films “Devar Magan” and “Hey Raam” were India’s official entry to Oscars. Now, the actor who manages a political party named as “Makkal Needhi Maiam” is also expected to appear in Indian 2 and Thalaivan Irukkinraan.

Previous articleManimegalai Returned To Chennai After 61 Days Due To Lockdown !!
Next articleIvanka Trump’s Tweet Made Indian People Angry !!

India clinched the world cup of 50 over One Day International for the first time on this same day of year 2011. The match...

This Private School From Salem Asking The RTE Scholarship Fees Back To The Parents !! Check Out Why !!

The Constitution (Eighty-sixth Amendment) Act, 2002 inserted Article 21-A in the Constitution of India to provide free and compulsory education of all children in...