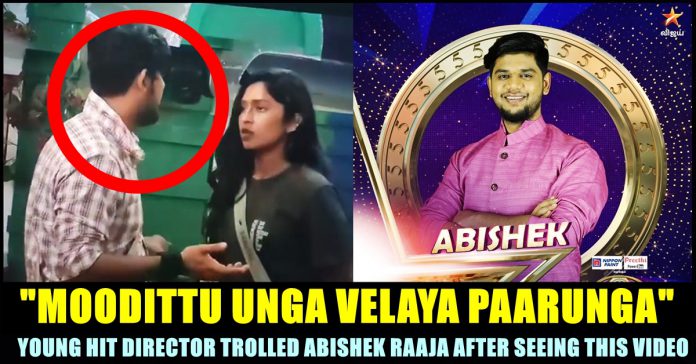 Young and emerging director Pradeep Ranganathan who is known for directing “Jayam” Ravi in his recent blockbuster “Comali”, trolled Abishek Raaja of Bigg Boss season 5 after seeing Suruthi shutting him down by asking him to mind his own business. Pradeep said that people, including himself are saying the same thing to him while he was outside Bigg Boss house. The filmmaker added the video in his twitter timeline and Instagram story to make sure all his followers are seeing it.

Abhishek Raaja has been facing the wrath of Bigg Boss viewers due to his nosy attitude. In one of the recent episodes, the movie reviewer tried influencing other contestants in a coin task and firmly believes that it is his strategy. Majority number of Bigg Boss viewers are expressing their frustration over Abishek Raaja. Suruthi, on Thursday’s episode, asked Abishek to mind his own business.

Sharing the video, Director Pradeep Ranganathan of “Comali” fame said it is the same he was being told while he was reviewing movies outside. “Ithe dhaan ivaru veliya irukumbothum sonom” the filmmaker said in his story.

Earlier, dance choreographer Sathish uploaded a tweet asking when Abishek Raaja will get evicted, on seeing the way he behaves inside the Bigg Boss house.

Will abisnake come out this week . Can discuss nomination ? BB5

Abishek Raaja who interviewed almost all the top celebrities of Kollywood, has a separate fan following for the way he reviews movies. He also acted in a film named “Imaikaa Nodigal” as a best friend of Raashi Khanna. With immense passion for cinema, Abishek has been reviewing movies for years. His 2 minute reviews in “Fully Filmy” is pretty much famous and he grabbed the limelight after roasting Raghava Lawrence’s “Motta Siva Ketta Siva” film. As he got nominated for this week’s elimination, we have to wait and see if he walks out off the show.

Pradeep, on the work front, is all set to debut as an actor through his own directorial and the project is going to be produced by AGS entertainments.

Old Tweets Of Experts About Tewatia’s Innings Are Getting Trolled Now !!

Everything including Mayank Agarwal's century, The third best opening partnership between Mayank Agarwal and KL Rahul in the history of IPL, Nicholas Pooran's terrific...

Uttar Pradesh Minister Sanjay Nishad of BJP party stirred controversy after saying that people who live in India must love Hindi language and those...