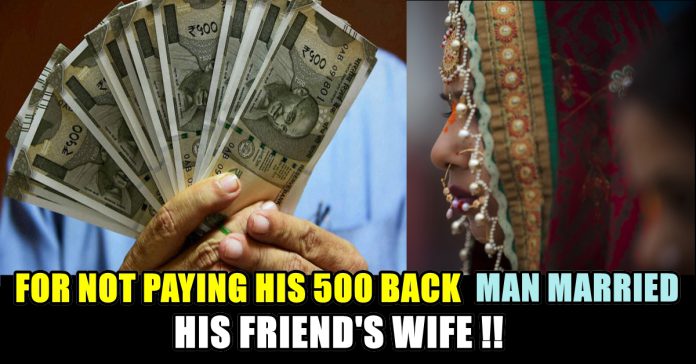 A resident of Belagavi “took away” his close friend’s wife and allegedly tied the knot with her. Reason: He was upset because his friend failed to return the Rs 500 that he had borrowed from him. Basavaraj and Ramesh, waiters in a restaurant in Belagavi, were close friends and often helped each other during their tough times. Basavaraj staged a dharna on the premises of the Deputy Commissioner’s office on Tuesday, urging the authorities to help him get his wife back. They have a three-year-old daughter. Basavaraj said he wanted the police to book a case as his wife was missing. But they refused to accept the complaint, he claimed. With no choice, he decided to stage the protest. Ramesh is already married, but has reportedly sent his wife to her parents’ house, following a rift between them sometime ago.  Back in Belagavi, Ramesh is leading a “new life” with Basavaraj’s wife after their alleged wedding.

Basavaraj’s wife was also employed in the same restaurant where both the friends worked and Ramesh came in contact with her there. When he faced financial crunch a few months ago, Basavaraj borrowed `500 from Ramesh, but could not return the money owing to the crisis he continued to face. Ramesh was allegedly threatening Basavaraj whenever the latter questioned him about his “missing” wife.

Basavaraj not only alleged that Ramesh took away his wife, but also accused him of abandoning his own wife. According to Basavaraj, he did try to convince his wife over phone to come back but she refused. He accused Ramesh of “brainwashing his wife and taking her away.”

Previous articleYou Must Went Through These 12 Things, If You Were Born As A 90’s Kid To A Strict Mom !!
Next article“Are You Going To Bowl Or Should I Change The Bowler?” Dhoni Said To Kuldeep Yadav On Field !!

A shocking report on a woman named Manjula misused actress Keerthy Suresh's picture to steal Rs. 41 lakh from an engineer named Parameshwar. It...

England dished out one of their most devastating performances with the bat in the World Cup 2019 on Tuesday as they crushed Afghanistan by...