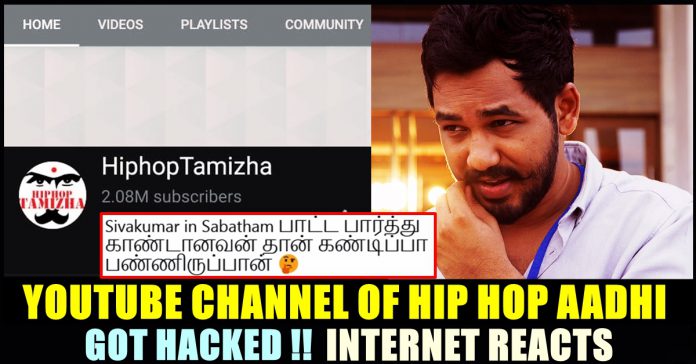 Hip Hop Tamizha who gave blockbuster albums such as Thani Oruvan, Imaikka Nodigal etc. He is all set to make his furth film as protagonist through “Sivakumar Sabatham”. His first two films “Meesaya Murukku”, “Natpe Thunai”, received positive reviews from the audience and “Naan Sirithaal” receivedaverage reviews. He entered film industry through “Aambala” of Sundar C who bankrolled his first two films as an actor.

Fans and users of online platforms has been reacting in various ways as the channel contained a number of quality Independent music videos including “Jallikattu” and “Tamizhi”. Many made fun of the incident and posted memes as well. Check out some of the reactions below :

The channel is yet to be recovered and Aadhi is expected to register a legal complaint against the miscreants. On the work front, the actor is all set to appear in films such as “Sivakumar Sabatham”, “Anbarivu” and more. He is composing music for A1, Telugu remake of his “Natpe Thunai” and a film named “Aalambana”.

A man has refused to pay the cash that was mistakenly deposited in his account. He also refuses to give the money back. An...