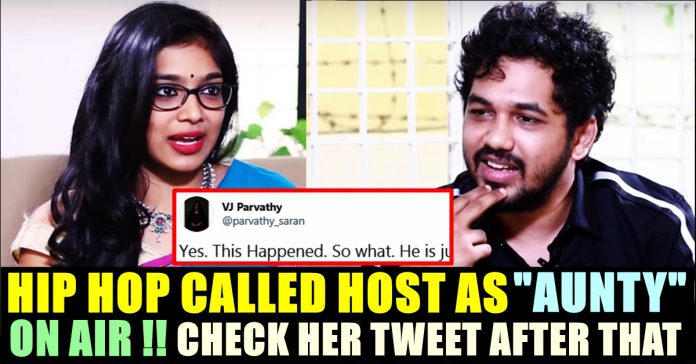 The musician grabbed the attention of netizens for one of his answer in a recent interview shot by Galatta youtube channel. In the interview which was hosted by RJ Parvathy, we can see Hip Hop Aadhi sharing many things about his past, present and future.

About “Naan Sirithaal” which was directed by Raana, a former assistant of director Shankar, Hip Hop said that he is going to act for the first time in his acting career. “For first 2 films, I acted as myself which was not much difficult. But in this film , I am required to act which is very difficult” he said.

However, what grabbed the attention of fans the most is, when the actor replied to one of a cheeky question of the anchor. She asked Aathi whether he “sighted” (local term used to define the act of gazing at the opposite gender) any “Aunty” till now to which Aadhi immediately replied by saying “Not until meeting you”

Everyone including the host took his answer lightly and the particular clip is going viral in social media platforms. Now VJ Parvathy has been reacting on the same in her twitter account. To a fan who shared the video, she asked “Ada. Do I even look like one !?”

Followed by this she added another tweet saying that she learnt a lesson from that interview. “Yes. This Happened. So what. He is just joking Ba. Lesson : No More Sarees” she said in her tweet :

Yes. This Happened. So what. He is just joking Ba.
Lesson : No More Sarees https://t.co/Bz6HNSyK8u