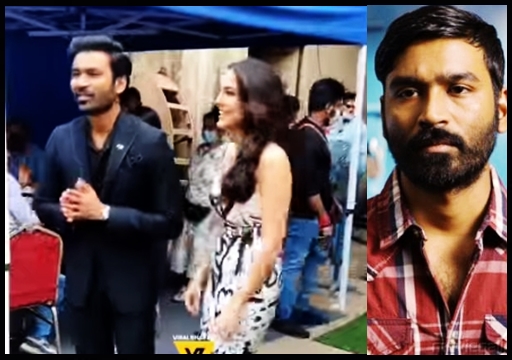 Hindi Reporter Asked Dhanush To Say Something In “South” !! Netizens Got Angry

Despite of the humble reply provided by Dhanush to the reporter, Tamil nadu based online users are not happy with the way a reporter asked Dhanush to say something in “South” during the promotions of “Atrangi Re”. Many users got upset over the reporter who didn’t know that the thinking language of the star is “Tamil” not South and also expressed their frustration for embarrassing the actor through their insensitive approach.

Actors Sara Ali Khan and Dhnush are currently busy promoting their upcoming film “Atrangi Re”. In the video which is going viral in online platforms, a reporter could be heard asking Dhanush “Sir kuch South mein boliye na?” which means “Sir please say something in South”. The confused actor goes “Haan” without knowing what to answer. Another reporter says “Tamil mein, Tamil mein” (In Tamil) to which Dhanush wishes “Vanakkam” with folded hands in a confused state.

Sara Ali Khan could be seen bursting into laughter on seeing what’s all happening. Watch the video below :

Netizens, including those who hail from north part of the country, came up with reactions slamming the photographer for not being specific. Few even pointed out the humble behaviour of the leading Tamil actor. “It is called தமிழ், Dhanush is showing true patience and grace here” a twitter user wrote on seeing the video whereas another one dropped a comment saying “Brother South India has 4 languages Telugu, Kannada, Tamil and Malayalam. If somebody asks a North Indian to say something in ‘North’ then will he speak Hindi, Marathi, Gujarati, Punjabi or Himachali” in Hindi.

It is called தமிழ், Dhanush is showing true patience and grace here. pic.twitter.com/tOPsZLZZxV

Something from the South dhana da? Take it! https://t.co/vdt6MotZBN pic.twitter.com/4hcCK9ucRn 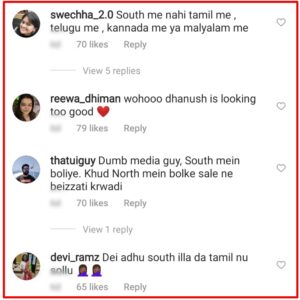 They know the difference between language and place. It’s just that they are ignorant about it. And, what I infer is that I t’s a way of telling that ‘you South Indians are beneath us’.

so sara ali khan and dhanush were promoting their movie or smth and one of the papz asked him to say namaste in ‘south’???? WTF IS SOUTH??? TAMIL ENN PARAYADA SHADDITHALAYA

During the promotions of #AtrangiRe, Dhanush was asked to say something in ‘south’ by some dumbfuck journalist. These Viral Bhayani kind of paps are just stupid and ignorant. Somebody tell them ‘South’ is not a language.pic.twitter.com/Izy2jHGzyM 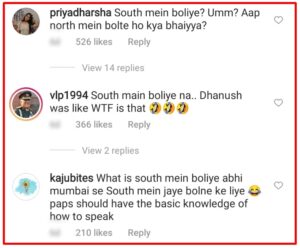 On the work front, Dhanush is busy doing films such as “Maaran”, “The Grey Man”, “Thiruchitrambalam”, “Naane Varuven” etc. “Atrangi Re” is scheduled to release on 24th of December on Disney plus hotstar in Tamil and Hindi.

For doing his job, a fan of former Indian captain Dhoni confronted Simoun Doul, a cricketer turned commentator who is currently involved in commentating...

Actor and Politician Udhayanithi Stalin who has been grabbing headlines in recent times for his outspoken attitude, triggered a fan war after expressing his...