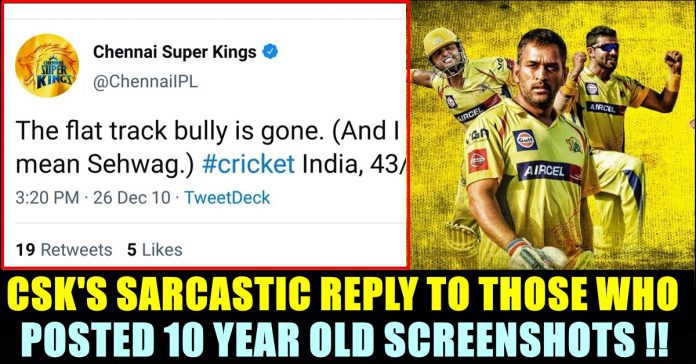 For past couple of days, few screenshots of the old tweets of Team Chennai Super Kings is doing rounds in social media. The screenshot are being widely shared by the fans of other teams with an intent to troll the yellow team. Now, the official twitter handle of the team has came up with a hilarious tweet in a way of responding to the trolls.

Chennai Super Kings team is one of the most loved franchise in Indian Premier League tournament. The team not only loved by the fans who belong to Tamilnadu but also by the fans across the world. The reason behind it is nothing but the captain who leads the team since the inaugural season of IPL.

After serving a two-year suspension from the IPL starting July 2015 for the alleged involvement of their owners in the 2013 IPL betting case (along with Rajasthan Royals), the Super Kings returned to the league in 2018, winning the championship in the comeback season, its third overall to tie Mumbai Indians for the record for most IPL title wins. In the last season, the team went to finals and lost to Mumbai Indians by failing to score 149 runs in 20 overs.

The social media account of Chennai Super Kings is very famous for their witty replies to the opponent teams and its fans. The account which is active throughout the year, would post about every current happenings of cricket related to Chennai. Now as the 12th season of the Indian Premier League is approaching, fans of the IPL teams are already started involving in verbal spats.

Now, few screenshots of 10 year old tweets of CSK’s twitter handle is going viral in social media. In the tweets, CSK can be seen criticizing the senior players of Indian cricket team, such as Rahul Dravid and Virender Sehwag. Check out some of the tweets which are trolling CSK based on their old tweets :

Now, Chennai Super Kings, in a way of replying to all such trolls, posted a tweet through their official handle in which they are enjoying more than 50 lakh followers. Posting a picture of CSK player Ambati Rayudu with a animated gesture, CSK wrote a popular dialogue from the movie “Vasool Raja”. “That how do I know sir?” #Yellove caption of the tweet read.

The dialogue would be delivered by Crazy Mohan in the movie who is very much known for his witty writings. In a way of confirming it, CSK even replied to fan who guessed it with a yellow heart.

What do you think on this reply of Chennai Super Kings for the accusation of the opponents ?? Comment your views below !!