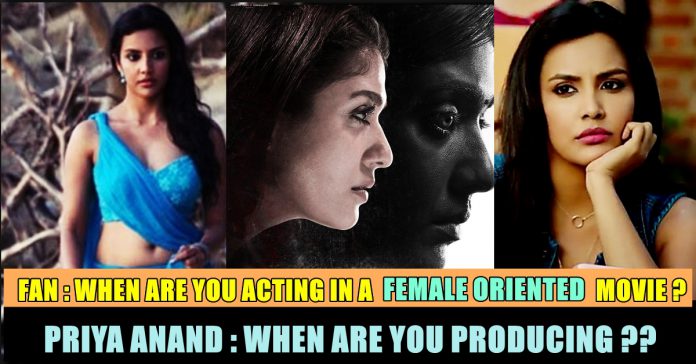 Directed by KR Prabhu and written by RJ Balaji, the film LKG follows the journey of Lalgudi, who is better known as LKG, as he takes a dig at major political events in the past few years. Kamal Haasan’s entry into politics, violence caused by cow fanatics, the jallikattu debate and the freebie culture in Tamil Nadu are some of the subjects that are parodied in the trailer.

Meanwhile the film’s heroine Priya anand today shared a post about an update on the release date of the film. Check out her tweet here :

Looking Forward To A Fun Evening With U Guys! Tweet Away 💙 https://t.co/HLDNsGPh91

To this tweet, one of her follower Balaji Gopal asked when she is going to do a “woman lead” film. He also expressed his wish of seeing Priya Anand as Vijay Shanthi.

When are you acting in woman lead role film ? We want another Vijaya Shanthi 😌😌😌

To this Priya came up with a sarcastic, yet a humorous reply. The Vamanan actress said “🙈😅😅 Babe when are u producing this film! 🤪”

Priya Anand is an Indian film actress and model who appears in Tamil, Malayalam, Hindi, Kannada and Telugu films. After pursuing higher studies in the US, she began a career in modelling in 2008 before making her acting debut in the Tamil film Vaamanan.

Born and raised in Chennai, Priya Anand is one of the very rare actress who dubs for almost every movie of her. She is also one of the rarest actress who could speak the Tamil language well among the Kollywood actresses.

Comment your views on this reply of Priya Anand !! Do you also want to see her in a full length female oriented movie ??