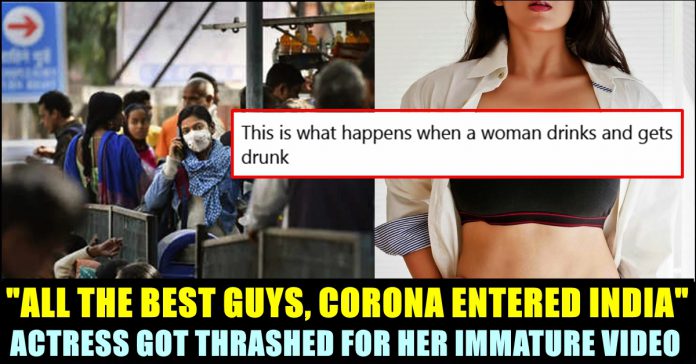 Coronavirus is one of the dangerous threat as of now across the world. The disease started infecting in China and caused several deaths. Now it has been reported that the disease started spreading in India which resulted in three persons in Kerala getting hospitalized few days ago. The lethal disease has killed more than 1100 people in China and has spread to over 20 countries across the world.

Recently, a man named as Balakrishnayya from Chittoor district in Andhra Pradesh killed himself after suspecting that he had Coronavirus. He did by believing that he is going to prevent the disease from spreading from him to his children and to his villagers. Now to our shock, Union health minister Harsh Vardhan has announced that 22 new positive cases of coronavirus have been found in India.

Now actress Charmme who debuted to Tamil film industry through Simbu’s Kaadhal Azhuvathillai is facing severe criticism from the users of online platforms due to one of her recent video. “All the best guys. You know why ? Because coronavirus has arrived in Delhi and Telangana. That’s what I have heard and That’s what is in the news. All the best guys, Coronavirus has arrived” she says in the video with wide laugh.

This video went extremely viral in social media platforms as many slammed the actress for involving in such insensitive activity. “She must be thinking it is a name of an ice cream!!!” one of a twitter user wrote to slam the actress. Check out some of their reactions below :

hey @Charmmeofficial since you’re being treated as a celeb (my bad,you shouldn’t be actually) you should spread preventive measures to public to avoid being affected,instead you’re doing this SHIT that too on @TikTok_IN 🤦🏻‍♂️@MoHFW_INDIA she needs attention

She must be thinking it is a name of an ice cream!!!

This is what happens when a woman drinks and gets drunk

She lost it. By the way what happened to the Drugs case in which all of them were questioned?

However the actress posted an apologize tweet for posting such video and strangely she deleted it later. The screenshot of her apologize video is doing rounds in the micro blogging social media site as well.

Charmme Kaur is currently producing Vijay Devarakonda’s upcoming film “Fighter”. She was last seen in Tamil in an item number in Vikram’s “10 Enrathukulla”. Comment your views on these strange activities of the actress !!