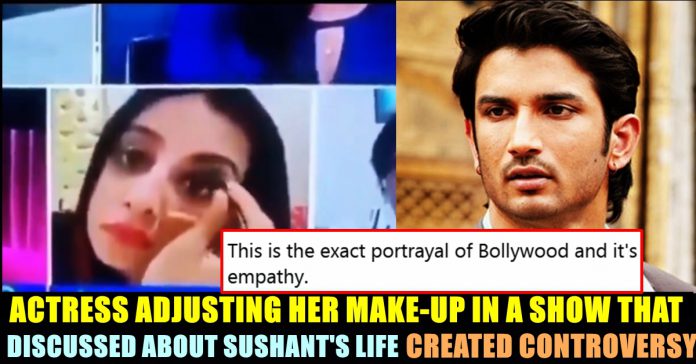 Heroine Adjusted Her Make Up During A Discussion About Sushant !!

Actress Sanjjanaa Galrani having a tough time since the noon of Sunday as she caught adjusting her make up during a live discussion about the death of actor Sushant Singh Rajput. In the video conference which was participated by a number of other people, Sanjjanaa could be seen using her front camera to adjust her eyebrows and cheeks. This created huge outrage among the netizens who started bashing the actress left and right with their posts and comments for her shameful behaviour. However the actress came up with a clarification explaining why she involved in such act.

Sanjjanaa Galrani, sister of popular actress Nikki Galrani who is known for acting in Darling, Ko 2, Kadavul Irukaan Kumaru etc, is also an upcoming actress in Tamil film industry. She was about to feature in a film named as “Poda Mundam” as female lead in which Ramar of Vijay TV fame was planning to debut as male lead. The project was announced in December, 2019. Now, the actress found herself amidst a controversy as she got captured while adjusting her make over.

The TV channel was discussing about the demise of Sushant Singh Rajput by playing the videos of the deceased. In the meantime, Sanjjanaa Galrani, without knowing that she was being captured, took her eyeliner and adjusted her eyeliner by seeing the front camera of her device. This video went viral among the social media users with captions slamming the actress for her inappropriate behaviour.

I can't even… 🤦🏻‍♂️ pic.twitter.com/vaybTmFe0I

Shameless Sanjana galrani. Why are people like her even invited to a news panel https://t.co/SFoba7pGXD

What is sanjana galrani even doing here 🙄🙄🙄. Doing her makeup while they are showing the body of sushant😣😣😣 https://t.co/iNMIn0oGgD

This is really shameful…
They are inviting the guys who has nothing to do with this… Look at this #sanjanagalrani how disgusting she is..💔😠😠😠 https://t.co/nQoUftkMKs

Reacting to these posts, Sanjjanaa, through her tweet said that she was not aware of she was getting captured. “I was not sitting in the panel in mumbai – I was shooting from my home on skype I’m in banglore city,& I was not even told Sanjjanaa ur on air plz get ready , the camera was fixed & on & I was still getting ready . Lite touch up for 2 seconds it was & look at the intolerance.sad” she said in one of her tweets.

Check out the series of tweets she posted regarding the controversy :

To Trollers , I was not decked up like I’m going for a wedding,stop making this comical,it’s a panelist’s Duty to look presentable & I don’t need your opinion on how I need to manage & present myself,it’s v sad how intolerant some comments are. It was a accident.Topicover. Shutup

I dint even kno when I went on air & when it was over – Chq the conversation what’s app b/w me & @aajtak staff – this is very sad that people don’t understand & haters troll so insensitively .mentally sickening vultures troll on internet. God bless ur thought process trollers . pic.twitter.com/PoiPW9RETO

Hi,there is a confusion-I was still getting ready and the video got punched I was not aware I was live, like u can see the anchor never took my name there was a audio glitch, Kindly don’t make a unnecessary silly issue out of sensitive situations,it was communicationgap.Stop now.

Dear friends & media , plz keep me out of this,this is a very sensitive issue,if I retweet msgs of harassment I’m receiving in my replies any one reading them will be devastated,irony of being a celebrity is that we hav to pay for things when we are not even wrong. Goodnight.🙏🙏

A panel on someone’s death is completely unnecessary and inviting people who has nothing to do with the deceased is irrelevant to the core. Comment your views on this activity of the actress and her clarification about it !!

Online fans of Tamil actor Vijay are celebrating the 6th year anniversary of his blockbuster film "Kaththi" which was released on 22nd of October...

“I am Ready To Enter Cinema, If I Get Opportunities” Says Tamilisai Soundararajan !! Watch !!

After Vijay Sethupathi , This High-Profile Superstar Joins Rajinikanth-Karthick Subbaraj Project !! This Is Getting Bigger !!