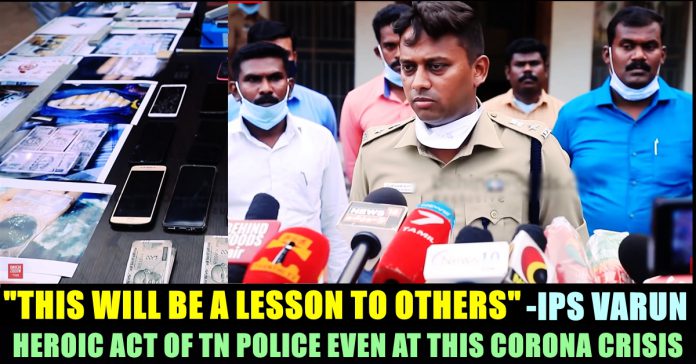 Heroic Act Of TN Police To Nab Drug Kingpins Even At This Corona Crisis !! WATCH

Ramanathapuram police have arrested nine people from Ramanathapuram and Sivaganga districts who tried to misuse the lockdown relaxation passes issued by the government for trafficking a range of narcotic and psychotropic drugs. IPS officer Varun, while talking to media said, that drugs worth more than Rs.10 crore were seized from them on wednesday evening. Drugs like methamphetamine, amphetamine, methaqualone, opium, heroin and ecstasy were seized from them, according to reports.

The accused were caught while planning to traffick drugs from India and Afghanistan to Australia through Sri lanka. This heroic act of the Ramanathapuram police, even at this situation of Global pandemic, was lauded by Director General of Police. The drugs were sourced from Afghanistan, Himachal Pradesh, Haryana, Madhya Pradesh and West Bengal through dozens of intermediaries in Goa, bangalore, Coimbatore and Pollachi, police said. Police officers intercepted the gang in Thiruvadanai, a sub division when they were going to Thondi, a coastal village in Ramanathapuram district to transport the drugs to Sri lanka.

G Arul Das of Ilayangudi in Sivagangai district, a drug kingpin is one of the accused who got arrested. The illegal drugs were to be ferried across Palk Stait in a country boat owned by guy named as Ajmal Khan of Thondi. Ajmal Khan, Abdul Kalam Azad, Abdul Wahab, Abdul Rahim, Suresh Kumar, Muthuraja, Kesavan are the other accused who got arrested while trying to transport the drug. Upon investigation, it has been revealed that they were involved in similar crime in the past. Along with the drugs, One auto-rickshaw, two two wheelers were seized by the police officers. Cases have been booked against the culprits under relevant sections of Indian Penal Code.

“I got informations about the trafficking in my special contact number sometimes ago. Pugazhenthi took care of the operational part and John Britto headed the intelligence, Serious crime squad Navaneetha Krishnan, Sub inspector Sathish, Senthil, Divakar, Jesudas, Guganeshwaran were the officers worked on this case. We followed with eight special teams of sub inspectors to nab the gang. Each of them followed a lead.” said Varun Kumar IPS to the media.

“In the digital evidence sub inspector Jesudas collected, lot of contraband substances such as gold biscuits, counterfeit currencies were captured. They even tried to trade the teeths of extinct species named as Saber-toothed cat.” he added who reported that the seized drugs worth Rs.10 crores.

“Due to this Corona crisis , 33% of police officers are in quarantine. With the 67% of officers we have, most of them are in duty to prevent Coronavirus and we have managed to pull this off with a small but effective team. Members of our crime team spent many of their nights without sleep and roamed to nab the culprits. Our effective team have arrested the notorious criminals and seized the materials as well. We also collected some valid digital evidence. Respected DGP sir appreciated us through phone call for completing the task even at this Corona crisis.” IPS Varun Kumar added who warned youngsters not to involve in such illegal business. “I believe this arrest will be a lesson to those who are trying to involve in this business.” he said.

Previous articleGautham Menon Opens For The First Time !!
Next articleHussain Converted Manimegalai Into A Muslim ??