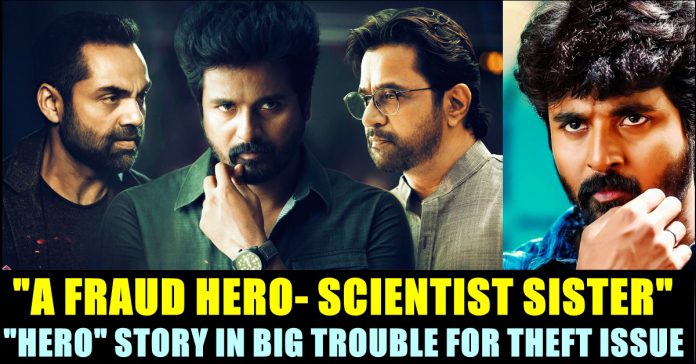 Sivakarthikeyan’s “Hero” movie released across the world yesterday. The film directed by “Irumbuthirai” fame P.S Mithran talks about the flaw in the educational system of India. Added with commercial elements, the film conveys a message to the students and parents of current generation.

Produced by KJR studios, the film has Abhay Deol and Ivana in prominent roles. The female lead is going to be played by Kalyani Priyadarshan, who is making her debut Tamil film with “Hero”. The Central Board of Film Certification awarded a clear ‘U’ certificate to the film.

As many films are facing plagiarism controversies nowadays, “Hero” also accused for featuring someone else’s story. Now director and leader of South India’s writers association Bhagyaraj has also declared that Hero’s story was a theft one.

Posco Prabhu who is currently working as an assistant director for Atlee, has alleged that his story was stolen by the makers of “Hero” to the writers association. After brief inquiry, Bhagyaraj has declared that the story belongs to Prabhu, according to Hindu.

In the letter written by Bhagyaraj to Prabhu, the ace filmmaker has said that Mithran’s story has so many similarities with Prabhu’s story. “You have complained that the story you have registered in writers association on 26. 04. 2017 is similar to Hero’s story. Going by your complaint I required story synopsis from both of you and compared them. The comparison was made not only by me but also by 18 important members of our executive committee. All those 18 people are seasoned writers and directors” the letter of Bhagyaraj to Prabhu read.

*All of them stated that both of your stories are similar. As I had the same opinion I asked Mithran to my office. “A Fraud hero – A sister who involved in research- A Villain who betrays her in the name of getting her the copyrights for her product- Sister’s Arrest- returning through train after release- Suicide- A reformed hero – Avenging the villain* are similar in both the stories.

“I have told Mithran about these similarities but he demanded to get an explanation from all the 18 members. In the discussion, everyone denied to accept Mithran’s statements. They also asked me to get you (Prabhu) what you deserve”

“I have sent a letter to Mithran on 22.11 2019 in a way of providing justice like we have provided in Sarkar and Comali issues. But Mithran didn’t respond to it and finished the movie. He even bought “Caveat” from court to restrict you from taking actions to stop the release of the movie. He sent the copy to us as well.”

“The way he disrespected the association and the decision of its members irked our committee members. Considering it as a huge insult, they requested me take severe action against him. As the release of the movie got confirmed, you wished to get justice from court.”

“I as a leader of writers association with the confirmation of 18 committee members, declaring that both the stories are similar and providing you this letter as an evidence. Wish you the best of luck to get justice in court” said Bhagyaraj in his letter.

This news shook the industry and reactions are pouring from all over the internet.

Previous articleBigg Boss Contestant’s Unexpected Reply To Her Follower !!
Next articleSiddharth’s Fitting Reply To BJP Guy Who Accused Him !!

DD Neelakandan On How Nayanthara Would React If She Gets Angry !!

DD Neelakandan who is a TV host by profession has a good bonding with few of the big names of Kollywood industry which is...

Journalist Madan who is known for working in news channels as an anchor and reporter, came up with a video in his youtube channel...