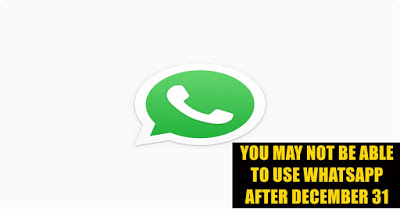 Here’s Why Your Whatsapp May Stop Working In 2017

Right from when it was released whatsapp has been constant feature of our life. It started trending wildly due to its no cost messaging service. When people were using rate cards and message boosters to text whatsapp came as a huge alternative. Though it had got many rivals after its launch whatsapp still stands strong as one of the most popular messaging services. But you may lose your way off whatsapp soon.

In a recent news issued by the whatsapp headquarters they said they’re intended to stop support for older models starting from the Jan of 2017. Although we don’t want this to happen theyre below part firmware support makes them a barrier to future updates.

“While these mobile devices have been an important part of our story, they do not offer the kind of capabilities we need to expand our app’s features in the future,” the report said, quoting a spokesperson from WhatsApp.

This means whatsapp would stop working for IOS versions less than IOS 6 and android would have whatsapp operating only after android 2.2. However nokia phones under Symbian S40 and Blackberry phones running on BBOS 10 would have extended support till June 2017.

Previous articleBrace Yourself. Average Wind Speed Of 65kmph Expected.
Next articleNew 20 Rupees And 50 Rupee Notes On The Market Soon.

Veteran actress Sripriya who is known for pairing up with Kamal Haasan and Rajinikanth, along with several other twitter users, called out Archana as...

Kalyan Jewellers In Trouble After Their Latest Ad !! Apologized For Hurting Sentiments !!