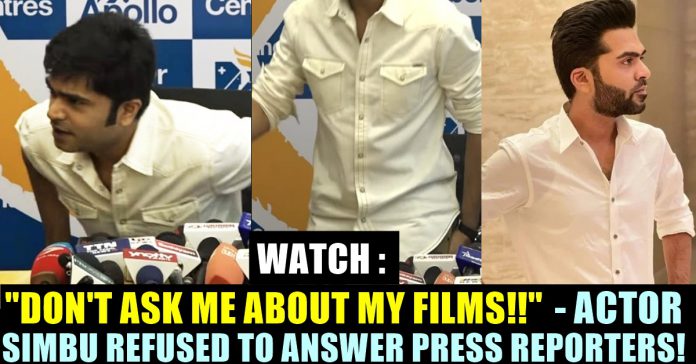 Liked by the youngsters for his outright attitude in his real life, S T R, has given out a swag reply in the recent press meet. In the press meet, questions were raised by reporters in connection with cinema. Simbu however, showed his disapproval of the reporter’s question and walked away.

Actor Simbu aka Silambarasan started designing a place for himself in Kollywood since his childhood. Later he made his debut as a hero through Kadhal Azhivathillai. His movies like Kovil, Vallavan, Manmadhan made lads celebrate him. This charming made his way to the hearts of the women through his love boy get-ups. Simbu is not only known for his career in the movies but also his appearances in interviews, press meets and TV shows have huge attention among the people.

The Maanadu hero, attended a press meet on Wednesday while meeting the kids affected by cancer for Wor Rose day. This day is observed to commemorate Melinda Rose and exclusively to spread awareness about cancer. In the press meet, Simbu said he was not able to make it last time to the meeting with the children on this day. However, this year he visited to make the children happy.

In the meeting, a reporter was asking Simbu, “Usage of tobacco is prone to causing cancer. In movies..” before he completed his question Simbu interrupted the reporter. Simbu openly admitted that he has come for the kids and hence he doesn’t want questions related to anything else. Nevertheless, reporters didn’t spare him. They started raising questions regarding Nadigar Sangam, and his upcoming movie, Maanadu. Simbu walked away telling them not to talk about cinema.

Suguna Singh, Chengalpattu district's Superintendent of Police, on Saturday evening, uploaded a video in his official twitter handle to create awareness for the youths...