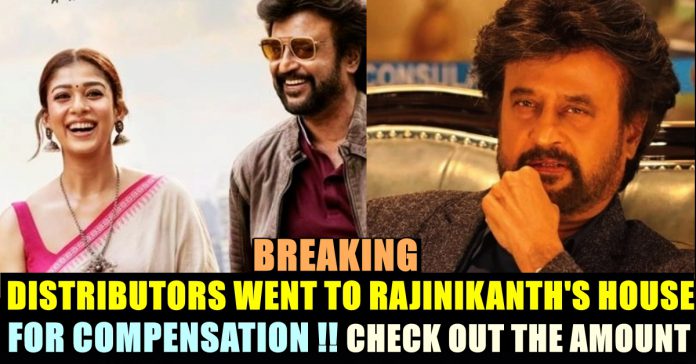 Darbar, having Superstar Rajinikanth in the lead, released for the Pongal festival of 2020. The film which created huge expectations before its release faced mixed reviews from fans after getting released in theatres across the world. Now a latest reports emerged saying that distributors from various places of Tamilnadu trying to meet the lead hero of it to request compensation for the loss it occured.

The film which revolves around the protagonist Adhithya Arunachalam ( Rajinikanth), has every element of a Superstar movie. Nayanthara, Nivetha Thomas, Yogi Babu, Suniel Shetty, Prateik Babbar were done the supporting roles in the film. It is notable that Rajinikanth is returning on screen as a cop after 25 years.

Rajinikanth played the role of a cop in 1992 released Pandian. The background score and soundtrack were composed by Anirudh Ravichander, while cinematography and editing were handled by Santhosh Sivan and Sreekar Prasad, respectively. The movie was made of a budget of Rs.200 crores, according to reports. Now the report of News 18 says that the attempt of distributors to meet Rajinikanth went in vain.

In his statement to media, Kaliappan said that he approached Lyca Productions as well. “We approached Lyca productions. They said they too have faced a huge loss and said that they couldn’t help us. Since the movie got failed to perform in the box office, we are suffering” Kaliappan said who added that they have faced a loss of 30% of total money they have invested in Darbar.

So far the film has collected Rs.192 crores across the world. It is notable that the production house has officially posted an announcement on 13th of this month saying that their movie has collected 150 crores at the box office.

The recent update said that the spokesperson of Rajinikanth has accepted for a meeting with the distributors. Total money of Rs.65 crores has been estimated as a loss amount by the distributors.

Comment your views on a film of Superstar Rajinikanth facing a huge loss at box office !!

Court Allowed Abortion To 10 Y/O Girl Who Got Impregnated By Her Father!!

On Thursday, Kerala high court allowed the termination of the pregnancy of a 10-year-old girl who got impregnated by her own father. The heinous...