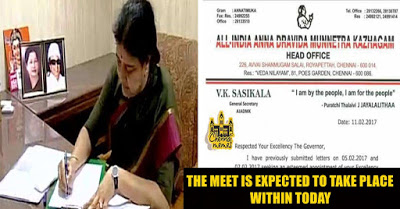 Here’s What Sasikala Said To The Governor.

The hot topic of Tamil Nadu and almost the entire country is the dilemma that is going on in the AIADMK party. With the post of Chief Minister at stake, the big shots are claiming of what is left to be tears and wears of the party. The battle wages on between Sasikala and Panneerselvam about who is going to get the throne. With the tide turning towards Panneerselvam’s favor, Sasikala’s party is said to be in a state of unrest.

The above is the letter written by Sasikala to our Governor asking him to hand over the post of Chief Minster to her soon.

She has mentioned to the Governor initially mentioning about their meet on the 9th of February with the ministers who supported her. She has mentioned that since the majority is with her she should be made the Chief Minister.

But due to the current unrest happening with Panneerselvam and the state of urgency happening in Tamil Nadu, she has asked the governor to permit her to meet him soon.

It is supposed to take place within today (11th of February) as security has been tightened around the Raj Bhavan. Further updates would be issued soon.

Previous articleAIADMK Politics-Everything That Has Happened Today.
Next articleHere’s What Sasikala Did Before Judgement Day-Ten Facts

Television actor Vishnu who shared screen space with Ayesha in a serial named Sathya that got telecasted in Zee Tamil, appeared in an interview...