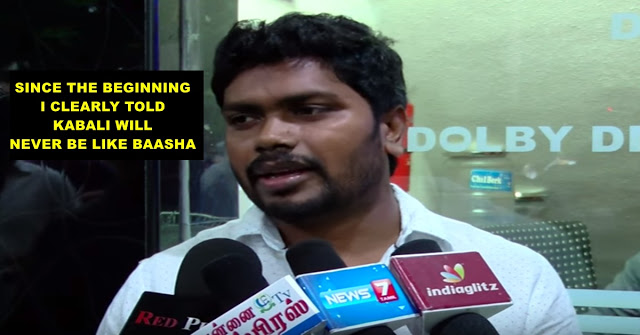 Here’s What PA.Ranjith Had To Say For The People Who Criticized Kabali.. Your Respect Towards Him Will Increase A Lot After This!

After all the high anticipation and waiting for the movie ‘Kabali’, it was finally released and has been 4 successful days of running. The movie has seen a huge box office hit and has shown many crores of profit. Rajini has done an outstanding job and so have the other casts of the movie.

Yet, there is an unsettled satisfaction for the audiences who watched the movie so far. While the Thalaivar fans had a treat for their eyes by just watching Rajinikanth on screen, the usual audiences were feeling this didn’t seem to be a Rajini movie. Some even felt the storyline to be a bit dragging and slow paced.
Asking the director of the movie, Pa. Ranjith, on how well the movie is doing in an interview, he had the following to say.
Right from the beginning, he had been clear on insisting this will NOT BE A USUAL RAJINI movie. Audiences won’t be experiencing the effect of ‘Basha’ but more of ‘Mullu Malarum’s Kaali put together. It is a story of a gangster’s other side. His love story portrayed at the age of 65. Comprising more of emotion and sentiment rather than commercial fights.
He also said that he has talked about a major social issue in this movie. Many Tamilians have been slaved and made to slog at Malaysia. Creating an awareness on this was his major idea and he is happy that as a human being he was able to voice his concern on this issue in his movie!
He was very glad that some sequences were applauded and appreciated by the audiences which were a real shock to himself. Also, he was overwhelmed to hear audiences’ appreciation on Rajini’s acting, Radhika Apte’s emotional performance and even Dinesh and Danshika’s outstanding acting!
Over all, he was glad that Rajini liked the movie. He had told him that this is what he has signed for and Ranjith has given the end result in a very beautiful way according to him.
Questioned about his movie’s ending, Ranjith said that this was what he had planned even when he wrote the script. He just wanted to portray a silent ending and he thinks he had achieved it.
Well, the movie did mark a big opening and audiences seem to have loved how Rajini is Showcased in the movie and the amount of sentiments and emotions put into it. Though it’s not the usual Rajini=starrer flick, this movie will still be one of his fans’ favorite.
Previous articleShocking: Two Men From Tamil Nadu Sentenced To Death In Qatar! Why Is TN Govt Silent?
Next articlePokemon Go – A Game Which Was Designed Mainly To Steal All Our Private Data.. Here Is How They Steal Them!

Telecom Regulatory Authority of India (TRAI) chairman RS Sharma’s alleged personal details were leaked on Saturday by a French security expert after he threw a...