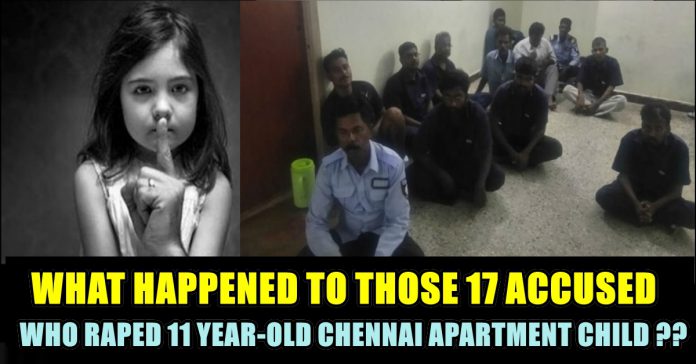 Over a month after horrifying news broke of the alleged rape of a 11-year-old child in Chennai, the Tamil Nadu police have slapped the 17 accused in the case under the Goondas Act.

Chennai Police Commissioner AK Vishwanath confirmed to TNM that the men, who have thus far been booked under the Protection of Children from Sexual Offences Act, have also been charged under the Goondas Act. The Tamil Nadu Prevention of Dangerous Activities of Bootleggers, Drug Offenders, Forest Offenders, Goondas, Immoral Traffic Offenders, Slum Grabbers and Video Pirates Act, 1982 or simple the Goondas Act defines a goonda as “a member of or leader of a gang, habitually commits, or attempts to commit or abets the commission of offences.”

Under the Goondas Act, a person may be detained without bail for a period that may extend up to one year.

In 2011, the Madras High Court held that a single case was enough to detain a person under the Goondas Act.

On July 17, news came to light that Priya*, a 11-year-old child residing with her parents at an apartment complex in Chennai, Tamil Nadu, was allegedly sexually assaulted, raped and threatened by service staff in the building over a period of seven months.

The men- security guards, plumbers, water delivery men and gardeners- were all reportedly employees of FOCUS and UK Facility Services, a private security firm in the city.

On July 27, a mahila court in the city granted the police department custody of the 17 men for a period of five days to conduct an interrogation. Investigating officers had earlier told TNM that they had a watertight case against the 17 accused.

According to a complaint by the parents, the girl was being raped and sexually assaulted for over six months and was too traumatised to tell her parents. It was only last month, when the survivor’s sister came home for a holiday, that the child confided in her.

In August, N Ramesh, a former magistrate was appointed by the Tamil Nadu government as Special Public Prosecutor in the case.

Fan Spotted Out The Only Logical Mistake In Tamizh Padam-2 !! Director Appreciates !!

Bigg Boss Tamil show which is grabbing the headlines for various reasons since the initial episode surprised its audience by eliminating Vanitha Vijayakumar in...

Chennai Traffic Police Is In The Receiving End For The Blunder They Committed !!

The official Twitter handle of Chennai Traffic Police mistakenly retweeted a post that contained a video of RSS members conducting a rally at Tiruvananthapuram....