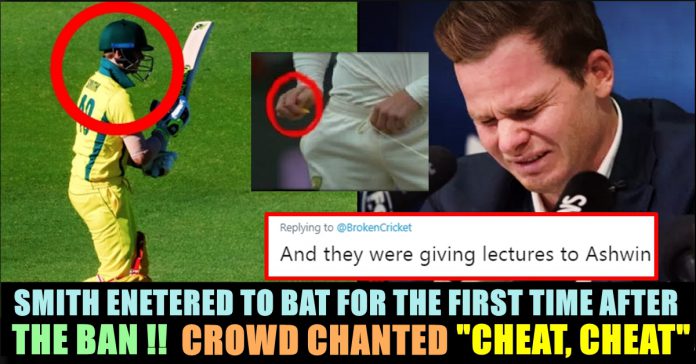 Steve Smith, before his dramatic fall from grace, was drawing comparisons with icon Donald Bradman. However, Steve Smith is now ready to pick up where he left off and shine for Australia at the upcoming World Cup. Smith, the then golden boy of Australian cricket, opted to turn a blind eye to Cameron Bancroft and David Warner conspiring to alter the ball during the third Test against South Africa.

His negligence proved catastrophic for his career and reputation as he was banned for a year and sacked as Australia captain. The 29-year-old has admitted that the ban left him devastated but he has done his time, worked hard to be in prime condition for his return.

Today in the warm-up match, Steve Smith and David Warner back into the Australian fold for the first time since the infamous ball-tampering incident last year. They are making their come back with their long time rivalry England and Steve Smith is currently going strong with his bat by scoring 64 runs with 6 boundaries.

But the sour part of the day for the Rajasthan Royals player is that when he entered the field for the first time after the long time, the crowd reportedly booed at the cricketer. According to the Netizens, the crowd also chanted “Cheat” when Smith made his entry. It is notable that Steve played some cricket in India after the ban period where he does not faced such disgrace.

Check out some of the opinions in Twitter about the incident :

Are we watching the convict coverage of England v Australia on sky? Not heard an English voice since I switched on. Instead it’s a convict wankfest on the cheat, Steve Smith #ICCWorldCup2019

They must have read Monty’s comments about their team using mints and zippers to help Anderson swing the ball.

Steve Smith did a mistake and accepted the penalty Still Southampton crowd chanted ” Cheat Cheat ” when he came to bat. Its hard on someone who is trying to retrieve the past glory.

Amid all the ‘banter’ I hope English crowds also appreciate how privileged they are to watch a master craftsman at work. Our summer will be a lot richer for Steve Smith’s presence

Meanwhile, Steve Smith is playing like he never left. #ENGvAUS

And they were giving lectures to Ashwin lol

Do they really deserve this after all of it ?? What do you think on this , comment your views below !!

Previous articleDonald Trump Said Indians Are Lucky To Have Modi As PM !! Check Out The Reactions !!
Next articleUNEXPECTED : Premji Uploaded A Video Of Actor Vijay !! Fans Couldn’t Believe !!

How Internet Reacted After The Release Of Karthik Naren’s “Project Agni”?? Check Out

Young and emerging filmmaker Karthick Naren has been hinting about his come back through his short film in "Navarasa" project, ever since the release...

Former Bigg Boss contestant and actress Vanitha Vijayakumar uploaded a couple of tweets raising questions regarding the media reports on Chithra's demise. She who...