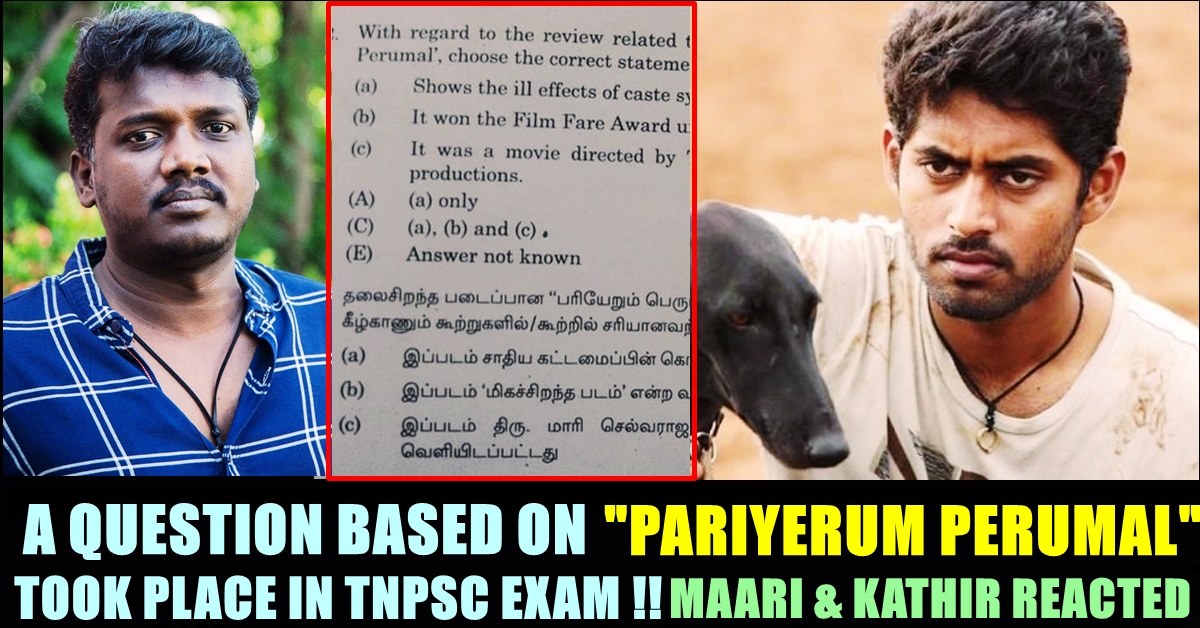 A question based on 2018 blockbuster “Pariyerum Perumaal” took place in the question paper Tamil nadu Public Service Commission Group 1 Examination and left the candidates thrilled. Questions based on Tamil reformist Periyaar, popular book Velpaari also took place in the question paper to their surprise. The exam took place on Sunday (January 3) and as many as 3 lakh candidates appeared in the examination conducted for 66 posts of deputy collector and district superintendent of Police.

The question paper, reportedly contained 10 questions based on Periyar and it was the first time that so many questions were asked on a single reformer. At this time, when the state is witnessing caste related atrocities in large number, a question based on the 2018 film “Pariyerum Perumaal” which talked about the struggles faced by a student of an oppressed caste was asked.

As soon as the picture of the question surfaced in Internet, it went viral among the fans of Tamil cinema with reactions heaping praise for the Maari Selvaraj directorial. Produced by Pa. Ranjith’s Neelan productions, the film had Kathir, Aananthi, Yogi babu in the lead roles. It became a huge hit during its release time and garnered critical acclaim as well.

“With regard to the review related to the Tamil Film and master piece Pariyerum Perumal, choose the correct statement(s) (a) Shows the ill effects of caste system (b) It won the Film Fare Award under the ‘Best film’ category (c) It was a movie directed by Thiru Mari Selvaraj and produced by Neelam productions.” the question in the TNPSC question paper read.

Fans of Tamil cinema are proudly sharing the question in social media platforms. Meanwhile, director Maari Selvaraj came up with a tweet saying that the intention of the creative got fulfilled. “Hereafter, it belongs to the human society” said the filmmaker and thanked his producer Pa. Ranjith by writing “பரியேறும் பெருமாள் என்கிற படைப்பின் நோக்கம் முழுமையடைந்தது. இனி அது மானுட சமூகத்தின் பிரதி”

“Question about our film in TNPSC Group 1 exam?!! These are all beyond our dreams. Now & forever #PariyaerumPerumal will stand & make us proud. Big thanks to everyone for loving us. Always grateful for my team” wrote actor Kathir in his tweet.

Question about our film in TNPSC Group 1 exam?!! These are all beyond our dreams. Now & forever #PariyaerumPerumal will stand & make us proud. Big thanks to everyone for loving us. Always grateful for my team @beemji @mari_selvaraj @Sridhar_DOP @Music_Santhosh & whole team pic.twitter.com/iHxpujfrPW

The new trend in question setting has been called as a welcome move as only those who are aware of the changing trends in Tamil culture can understand the questions. Director Maari Selvaraj is currently busy making “Karnan” which has actor Dhanush in the lead role. Reports suggested that he is going to join hands with Vikram’s son Dhruv after “Karnan”.