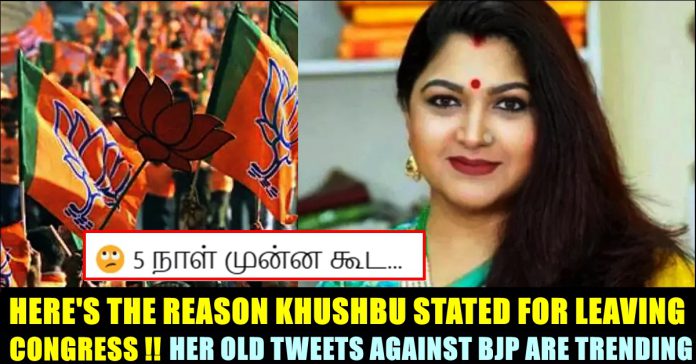 It is widely believed that the actor turned politician Khushbu is all set to join the ruling party of central government. She was serving as the spokesperson of the Indian National Congress till yesterday and has announced that she is quitting the party today. The “Annathe” actress, has said that she felt “pushed and suppressed” by people who had no connect with the ground reality.

“Few elements seated at higher level within the party, people who have no connectivity with the ground reality or public recognition are dictating terms and people like me who wanted to work for the party sincerely, are being pushed and suppressed,” the 50 year old actress aid in her resignation letter. “After a long thorough thought process over a period of time, have decided to end my association with the party,” she added.

A day after Khushbu flew to Delhi, the letter emerged. The actress is likely to join the BJP party as a member of Tamil nadu. The BJP is expected to give her a big job for the 2021 assembly election in Tamilnadu. “Khushbu will change the perception of Tamil nadu in BJP” said the BJP’s Tamil nadu unit according to sources.

In the year 2010, Khushbu joined the DMK party when the party was in power in Tamil nadu. The actress took the decision after playing “Maniyammai” role in the biography picture of “Periyaar” largely funded by the Tamil nadu government. “I think I made the right decision. I love to serve people. I want to work for the betterment of women” she said at that time.

Four years later. the actress left the party and joined Congress saying that “Hard work for the DMK had been a one way path”. According to NDTV, Khushbu said that felt Congress party as her home. “Congress is the only party that could do good for the people of India and unite the country” she reportedly said.

With the elections coming in 8 months of time, the BJP looks to score in Tamil nadu with Khushbu where the party lacks power. However, the actress is being heavily criticized for the decision she made. Internet users are quoting the tweets she posted just four day before against the BJP party.

As Khushbu joins BJP tomorrow, Bhakts be like- https://t.co/7QjJqkSD7j pic.twitter.com/4KQFRO1TuL

Now she will unblock as they belong to the same flock https://t.co/9KrOYN35Zb

This is such a fancy way of saying I am selling my values and ethics for material gains 🤷🏽‍♀️ https://t.co/16TE1iUfbL

Comment your views on Khushbu joining the BJP party !!

There is more than 100 days left for the most awaited thirteenth edition of Indian Premier League but fans are already in the mood...