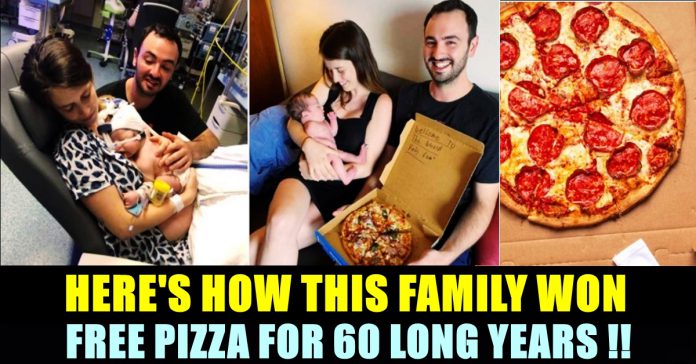 In an unexpected turn of events, a family in Sydney, Australia, became the first to win 60 years worth of pizza after meeting the terms and conditions set by Domino’s Pizza, an American multinational pizza restaurant chain that got founded in 1961. Domino’s in Australia had decided to hold a competition in celebration of their 60th birthday on 9th of December. The winning prize of the competition is a free hot meal every month until 2080, or approximately 720 nights off cooking, according to a social media post of Domino’s. The pizza company wanted a family to name their baby as ‘Dominic’ or ‘Dominique’ born in Australia on 9th of December to win the competition.

“To celebrate Domino’s 60th Birthday on 9 December 2020, we’re giving away the equivalent of 60 YEARS’ WORTH OF FREE PIZZA* to the family of a baby named ‘Dominic’ or ‘Dominique’ born in Australia on that day! 🍕👶That’s a free hot meal every month until 2080, or approximately 720 nights off cooking. To win, eligible parents must be the first to confirm with Domino’s that their baby meets these requirements” read the social media post of Domino’s.

The couple Ms Oldfield and Mr. Lot got the message from a family member who sent it to them as a joke. Two hours after Domino’s posted about the competition in their social media accounts and a 72 hour long labour later, a Dominic Julian Lot was born at 1 : 47 AM on December 9. The couple had already decided to name their child as “Dominic” prior to discovering the competition and picked it as soon as they discovered Clemantine was having a boy.

After the couple had settled on the name for their new-born baby, their family members informed them about the competition by Domino’s and Mr. Lot decided to submit the birth certificate of Dominic’s for the competition conducted by Domino’s. Soon after, they found out they won the cash prize of $10,080 which is equivalent of a $14 pizza every month for 60 years.

“My cousin, believe it or not, forwarded the details of the competition to my mum for a laugh. My mum did the same” Mr. Lot, father of Dominic said. “We hadn’t really thought much about it after that, as we were in the middle of long labor and were much concerned about ensuring the safety arrival of our baby” he added. “We couldn’t be happier ! After over a week in hospital for us, and over half of that for Dominic, I think it’s safe to say that it was a little over due” he said after winning the prize.

“Baked to perfection by mum, Clementine, with a little assistance from dad, Anthony, Dominic was delivered at 1.47am on Wednesday, 9 December, 2020, at Royal Prince Alfred Hospital in Sydney.” said Domino’s Australia while announcing the family as winners.

“Weighing in at 3.907kg, or approximately 23 garlic breads, he is the first baby for the couple and clearly a born winner. Not only was he always destined to be named Dominic (the top choice on mum and dad’s baby name list), but he ensured his debut early on Wednesday morning made his family the front runners for Domino’s 60th Birthday Giveaway – despite mum going into labour three days earlier!” their post read.

“What better way for our Domino’s family to mark this occasion and to share the joy of the next 60 years than with a truly unique birthday gift for someone’s own bundle of joy- from our family to yours” said the CEO of Domino’s Australia and New Zealand, Nick Night.

Previous articleShakeela Won The Hearts Of Internet With This Gesture !! WATCH
Next articleVideo Of A Man Accusing Lalitha Jewellery Of Cheating Him Is Trending In Internet !!

Rangaraj Pandey Resigned From Thanthi Tv ?? Check Out The Clarification From Himself !!

Rangaraj Pandey is Chief News Editor in Thanthi TV till yesterday, famous TV channel in Tamilnadu. Before working in Thanthi tv, he joined as a writer...