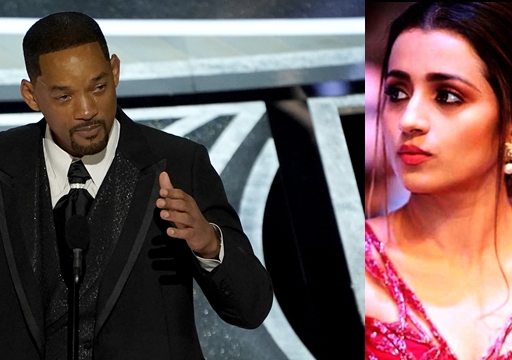 Tamil Nadu based cinema celebrities reacted to the famous Oscar incident where Will Smith slapped Chris Rock for making a joke about his wife. Actress Samantha shared a series of posts saying that both of them are wrong whereas Trisha shared the apologize post of the “Pursuit of Happyness” actor. Acclaimed Director Venkat Prabhu shared about the medical condition of Will’s wife and questioned those who condemned Will for his gesture at the Oscar stage. 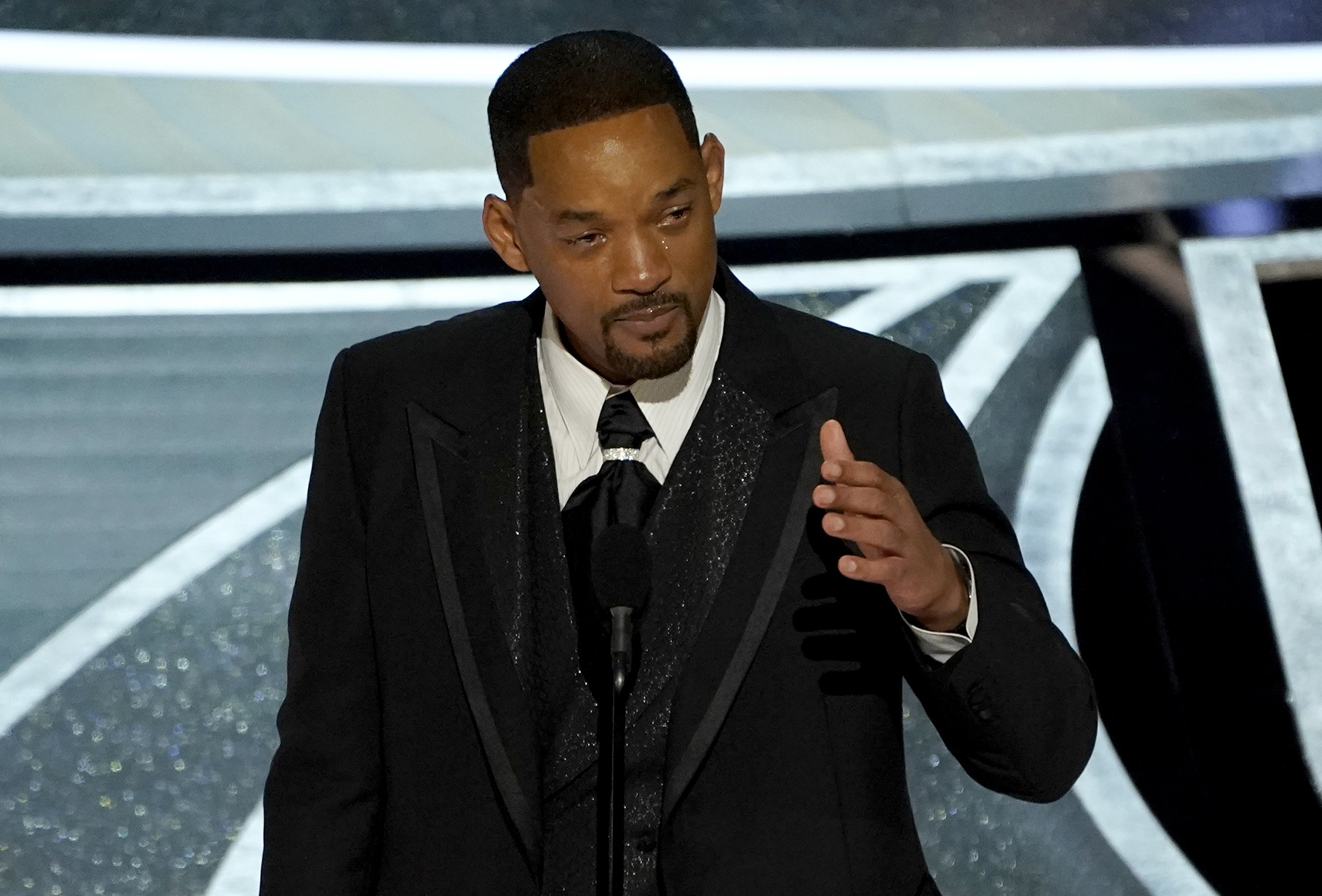 Globally acclaimed actor Will Smith sent shock waves to the viewers across the world by slapping Chris Rock on stage for making a joke about his wife. The actor wanted him to stop talking about his wife and yelled about the same which left the entire auditorium in sheer silence. The video goes viral across the world with many reacting in various ways.

While presenting the best documentary prize with a short comedy routine, Rock cracked a joke about Will Smith’s wife. Comparing Jada Pinkett Smith’s tightly cropped hair with Demi Moore’s appearance in the film “G.I Jane”, Rock suggested that she could appear in the sequel.

The joke triggered an awkward silence and confusion in the Dolby theatre and “The Pursuit if Happyness” actor strode up to Rock and slapped him before returning to his seat alongside Jada and shouting profanities.

The Full Uncensored video of Will Smith’s altercation with Chris Rock at the #Oscars pic.twitter.com/cGQ3plSEiz

Jada Pinkett Smith who is also an actress suffers from “Alopecia” and publicly revealed about her diagnosis in the year 2018. However, Will Smith came up with an apology through his official social media handle for his act at the Oscar stage.

“Violence in all of its forms is poisonous and destructive. My behavior at last night’s Academy Awards was unacceptable and inexcusable. Jokes at
my expense are a part of the job, but a joke about Jada’s medical condition was
too much for me to bear and I reacted emotionally. I would like to publicly apologize to you, Chris. I was out of line and I was wrong. l am embarrassed and my actions were not indicative of the man I want to be. There is no place for violence in a world of love and kindness” Will said in his press note.

“I would also like to apologize to the Academy, the producers of the show,
all the attendees and everyone watching around the world. I would like
to apologize to the Williams Family and my King Richard Family. I deeply regret
that my behavior has stained what has been an otherwise gorgeous journey
for all of us. I am a work in progress” he added.

From Samantha to Samyutha, many celebrities who work in Kollywood film industry expressed their respective opinions about the matter. Here’s reacted to the whole incident : 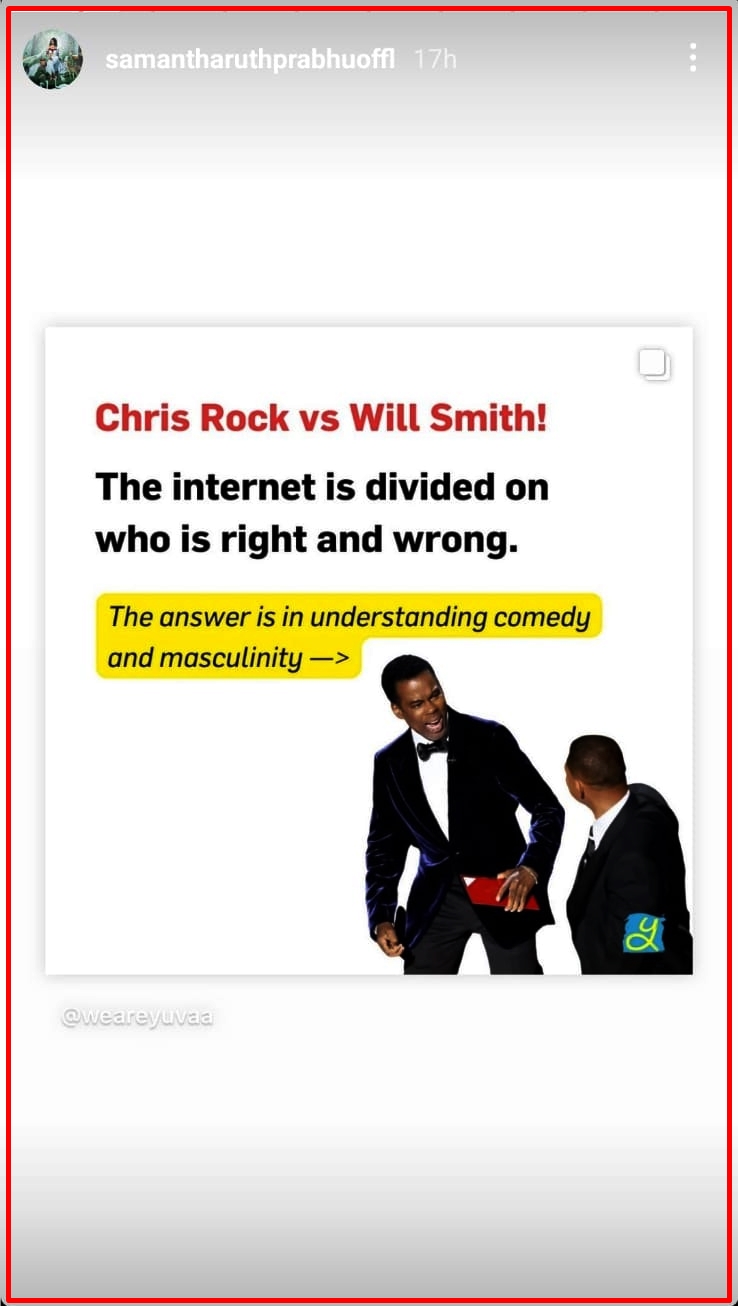 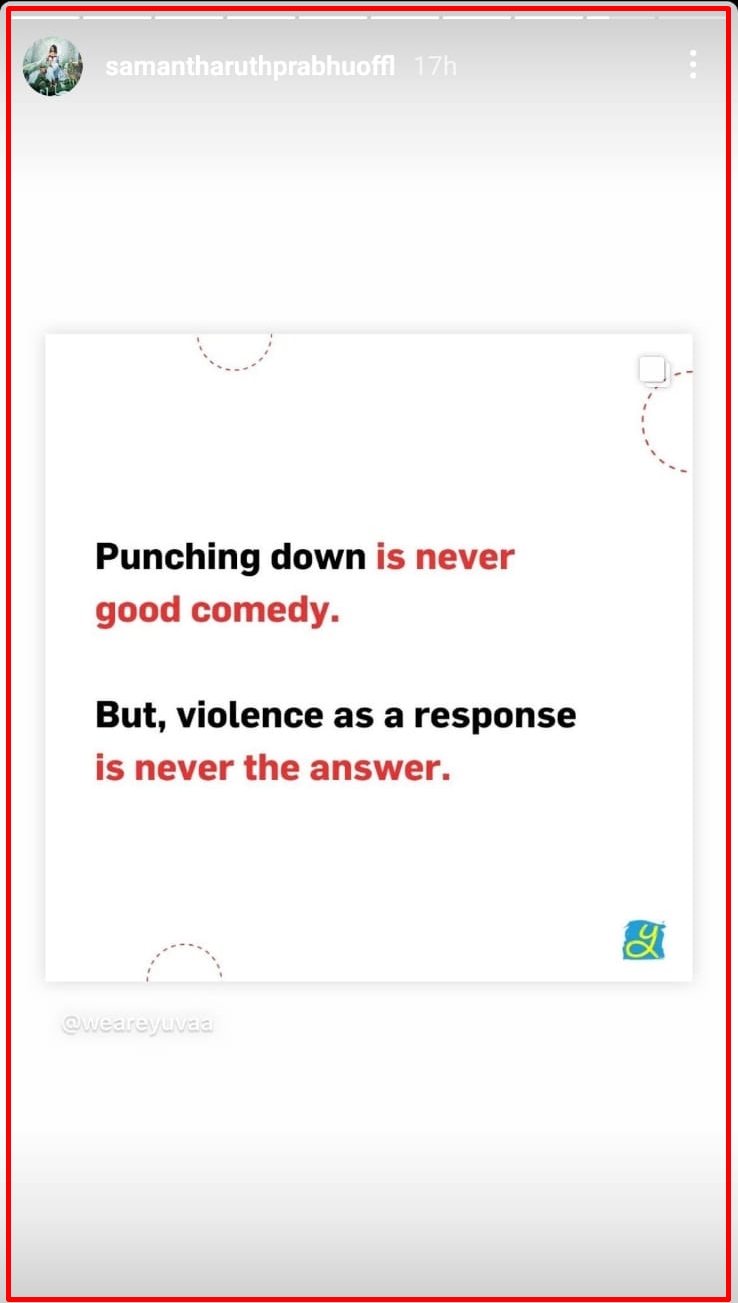 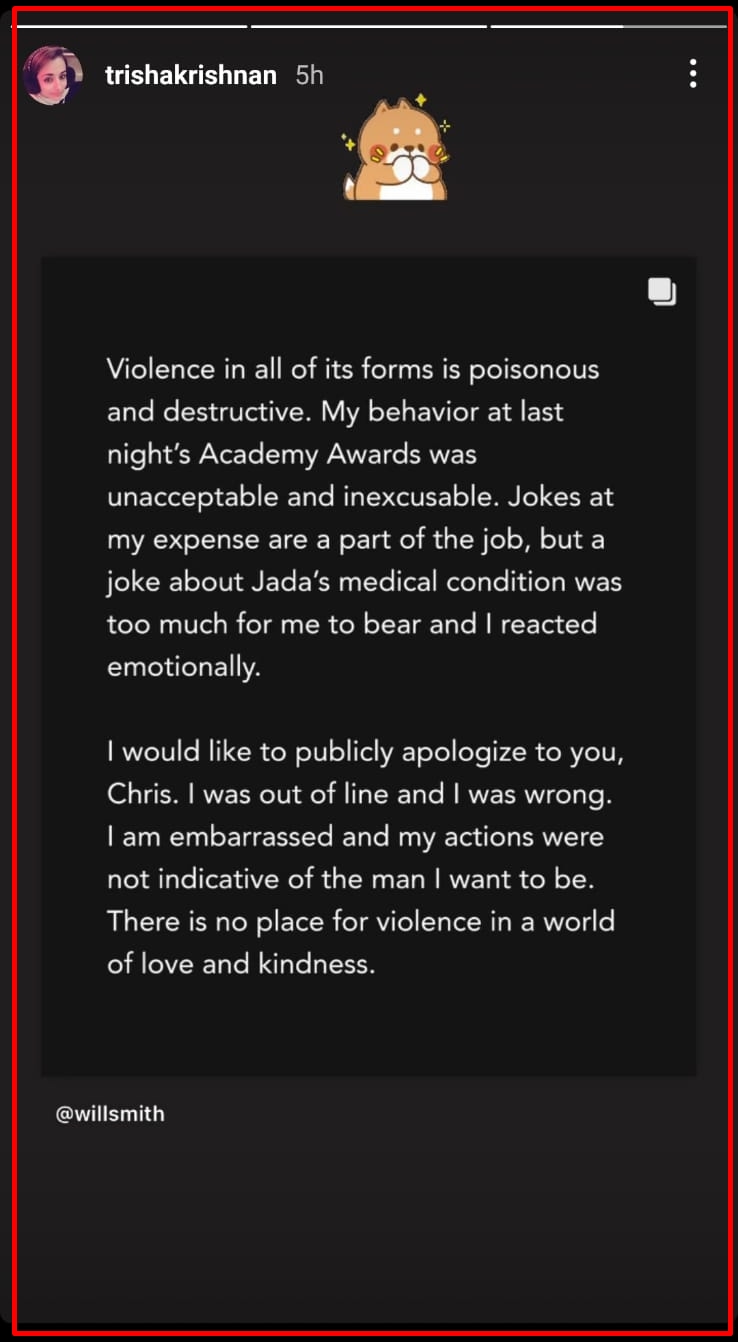 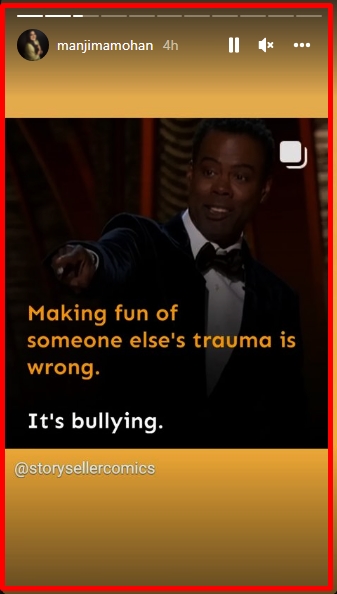 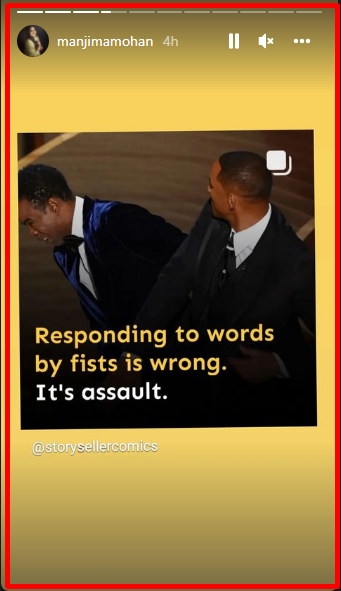 So you think it’s cool when #ChrisRock who thought it was “funny” to “joke” about the medical condition that #WillSmith’s wife has been diagnosed with at Oscar’s? pic.twitter.com/PBCyqbeZNR

If physically assaulting someone is wrong, isn’t mentally traumatising them?We speak so much about mental health and then go around disrespecting people like its nothing and expect them to take it! Every action has a reaction!
#WillSmith #Oscar #ChrisRock #whatjusthappened pic.twitter.com/1w0fE5vONC

When a man stands up for the woman he loves and respects, your respect for the man doubles up. ⁦⁩And Apologising for your actions does not mean you are falling, it simply means you are rising above pettiness and vindictiveness.
Kudos to you ⁦@willsmith⁩ . 🙏🏻🙏🏻👏👏❤️ pic.twitter.com/BhaG88ZW5U

So Will shudda taken it up with them and not shoot the messenger. The academy didnt press charges, didnt even condemn Smith, didnt apologise to ChrisRock. Shame on them. Shows you can get away with anything anywhere if u are big enough.#SlapGate #WillAndChris 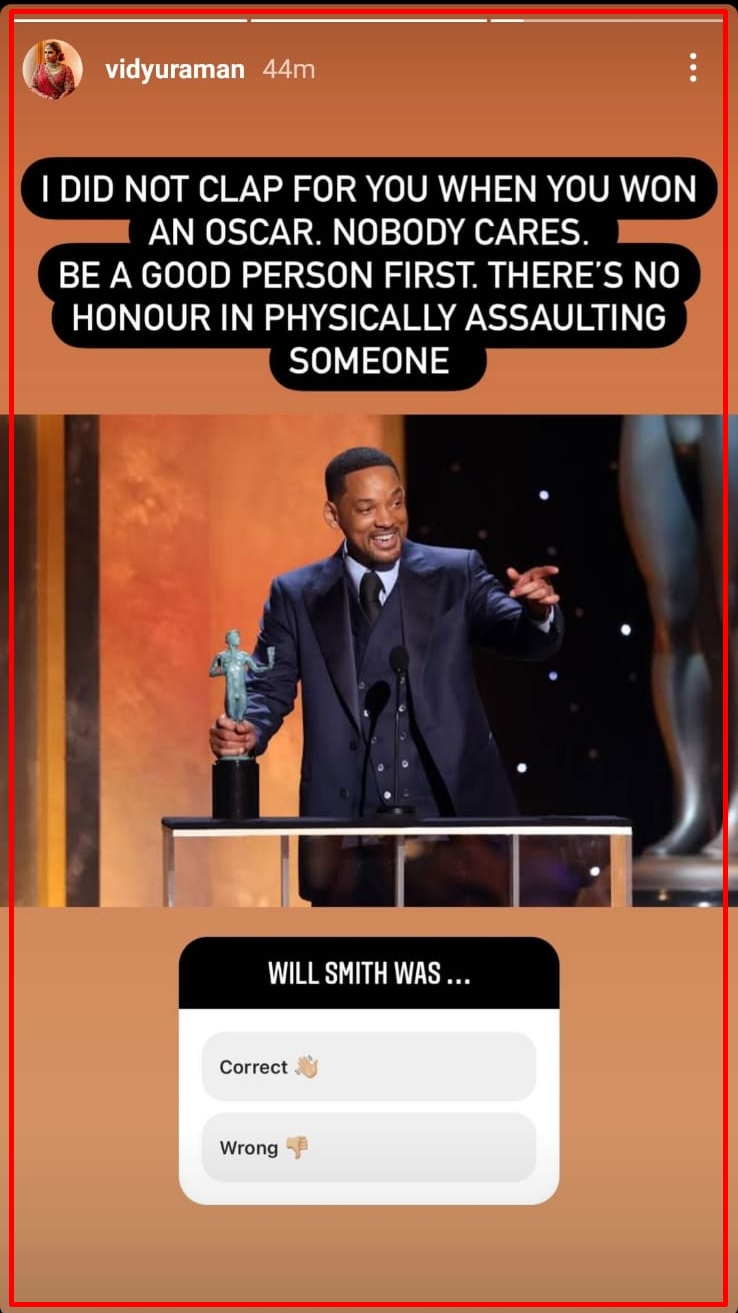 Political parties of state Tamil nadu are busy campaigning for the upcoming assembly polls. The Election Commission of India announced the schedule for...