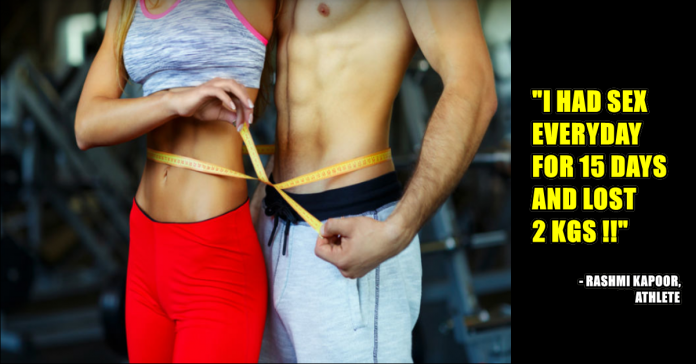 Rashmi Kapoor, a born athlete says that she and her partner decided to try something new by taking their friends as inspiration. As an athlete she faced no issues with her weight in her school and college days. By reaching middle age she started facing the consequences of hormones and gained so much weight. She found sex as a solution. Here she herself says how she lose her weight by having sex :

I actively involved in sports during my college time as i was a born athlete. When my hormones started acting as per their own convenience, i realized that i’m reaching the middle age and gaining weight so much.

I started having sex when I was 20 years old and in no way thought that one day I would use it to lose weight. My understanding of sex when I was in school was more about just kissing and it was only gradually (in college) that it shifted to what sex actually involved. The thrill of doing the thing that everyone else is doing always excited me. One day, my partner and I were talking about our sex life and how it had evolved over the years (we are pretty open about such aspects as a couple). We also spoke about how our friends who had recently started indulging in sex had also surprisingly lost weight. This gave us an idea. We both agreed to try new sex positions for the next 15 days for a minimum of 30 minutes every day and see what it does to our bodies. When you are comfortable with your partner, nothing seems weird, trust me. Everything, from standing to missionary to doggy, was tried and tested for the next 15 days. We made sure we did every move with all energy and as long as we were breathless. At first, we thought we were just being silly, but the idea of trying something new, together, was exciting. By the seventh day, we felt happier than usual and were also glowing after all that hard work!

Before trying this unique weight loss experiment, I had read on various websites how sex was a great activity to burn calories. Since my partner and I also exercise regularly, this was just an addition to our activity plan for the day. As luck would have it, I lost 2 kilos after having sex every day for two weeks. I felt that my pelvic area had become stronger (obviously) and that all my happy hormones were at their peak during this time. I would have never imagined that sex could make me lose weight until I tried it. Perhaps, this was the first time I attained pleasure while losing weight! (winks)

Previous articleKamal Haasan Asks Modi To Follow The Supreme Court’s Order !! : Check What Else He Asked The PM !!
Next articleThe “Ayan” Villain Was Arrested By The Police : SHOCKING To Know The Reason !!