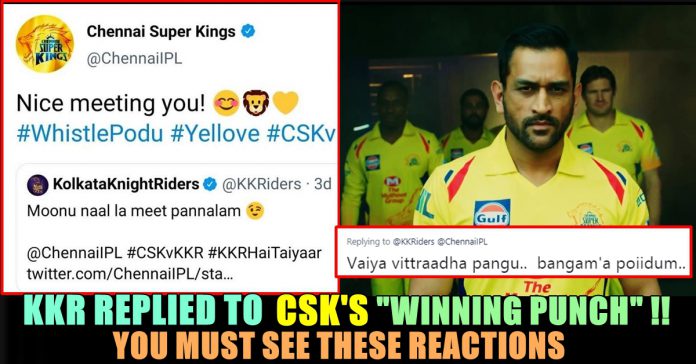 Here’s How KKR Replied To CSK’s “End Punch” !! You Can’t Miss These Reactions !!

Now after winning the game against KKR with 7 wickets in hand, Chennai Super Kings twitter handle did a thug life moment by replying to the tweet that was 3 days older. In the tweet CSk simply tweeted “Nice Meeting You” which went viral among the IPL fans.

So far this reply of CSK received 22,000 loves and enormous number of shares. Now to our surprise, KKR displayed the spirit of sportsmanship by appreciating the win of CSK. Through their twitter handle KKr said “Good Game” to Chennai Super Kings. Some of the CSK fans trolled them for their earlier tweet as well. Check out some of them here :

Meanwhile some of the KKR fans warned CSk team :

We will return everything with double interest in 4 days

We fought till the last run 💪🏻 #AmiKKR

Will show them the real match at Eden 💜

What do you think on this conversation of Chennai Super Kings and Kolkata Knight Riders ?? Comment your views below !!

Previous articleActress Kasthuri Trolled CSK For Their Slow Innings !! Trolled Back By Her Own Followers !!
Next articleEXCLUSIVE : Boney Kapoor’s First Reaction After Watching “Nerkonda Parvaai” !! He Wants Ajith To Accept This !!

Famous colourist Balaji who has worked in some of the notable films that were released in Kollywood, recently, came up with a tweet in...

The stars of Kollywood gathered in Chennai for one of the biggest award shows in south film industry, the 10th edition of Vijay Awards...