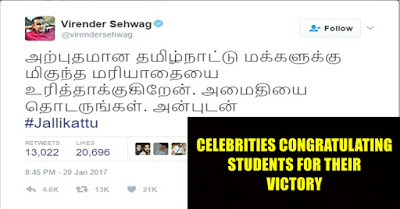 As we near the final phase of this war against the NGO corporate mafia, the world is admiring the happenings which are sparked and fueled by us, the students. As the first part of the protest (Issue a temporary ordinance )has successfully completed, we now move towards a more clearer path-issuing a permanent ordinance that supports Jallikattu. Though PETA and AWB have took the matter serious due to their pride getting crunched, we are witnessing a revolution now, which would eventually provoke Tamil Nadu to be a state without any corporate support.

Although there are huge supports coming from around the world, the center stage is all for students. Whatever the politicians and the film industry people try to garner media attention towards them, the students are riding strong, with majority, if not the entire media focusing only on their protest. At this point we also take time to thank News7 to be with us from the start, covering everything happening from the day they were asked to.

Now after our first victory, few celebrities have took to twitter, congratulating the students and some also voiced their support for the Revolt. Let’s look at few of them.

Sea of hope! What an inspiring visual!!! The future looks bright, a million stars at Marina. #jallikattu https://t.co/hiRNZIpvjT

Not only chennai .thanks to every single city district colleges and all tamizhargal .even thamizhargal from abroad 🙏 #திறக்கட்டும்வாடிவாசல்

Especially admire the way the students of Tamil Nadu have been standing up for the cause, relentlessly fighting for their roots and culture.

The way the #jallikattu protests are being held in peace is a lesson for the whole world. May everyone continue to maintain peace.

Witnessing a revolution in my time. A protest that can be documented as the ‘handbook for protests’ for rest of the world. Proud to support.

Any further tweets would be added into it.