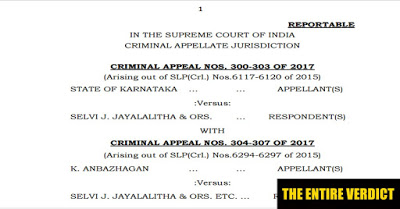 The drama running around the TN politics has finally reached it’s pseudo end. As the case against Sasikala has drawn to a close, the future of the AIADMK politics seem to develop into a better view. With the party doomed to a split up real soon, the scene is moving to either Palanisamy or Panneerselvam becoming the CM soon.

Since Jayalalitha had passed away by the end of last year, the Supreme Court has removed her out of the list of people accused. The two-judge bench comprising Justices PC Ghose and Amitava Roy directed Sasikala, Sudhakaran and Elavarasi to surrender forthwith to the trial court in Bengaluru and serve the remaining part of a four-year jail term.

You could read the entire judgement here,

Supreme Court of India by Firstpost on Scribd
Previous articleMeet The Judges Who Were Responsible In Sending Sasikala To Prison. Know About them In Detail Here !
Next articleHow Sasikala Became Pauper From Being A Topper Overnight Explained In 10 Steps

Fan Spotted Out The Only Logical Mistake In Tamizh Padam-2 !! Director Appreciates !!

For trying to earn money by utilizing this crucial situation, comedy actor Bala Saravanan who is known for acting in films like "Pannayaarum Pathminiyum",...